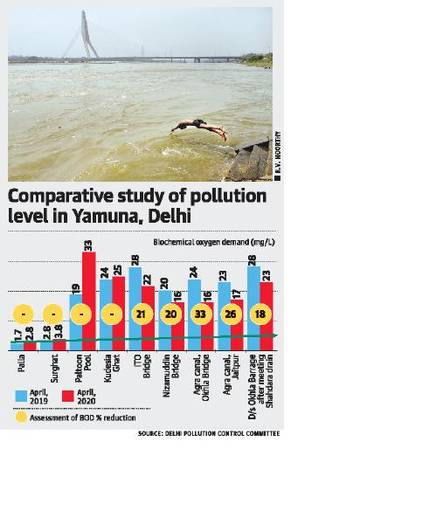 The quality of water in the Yamuna has improved along the Delhi stretch during the nationwide lockdown, compared to April last year, according to a report by the Delhi Pollution Control Committee .

A National Green Tribunal -appointed monitoring committee had earlier this month asked the DPCC and the Central Pollution Control Board to measure the quality of water in the Yamuna.

On April 6, the DPCC had collected water samples from nine locations along the Yamuna and 20 locations of drains and compared the different parameters with values from April 2019. Of the nine locations of the river, an increase in pollution was observed only in Khajuri Paltoon Pool, according to the report. Of the nine locations from where the DPCC took samples, five have shown 18%-33% reduction in biochemical oxygen demand levels. BOD is the amount of oxygen needed by microorganisms to decompose organic matter under aerobic reaction .

A higher BOD level means that more oxygen is needed to decompose a large quantity of organic matter present in the water.

Dissolved oxygen is the amount of dissolved oxygen present in the water which is needed for aquatic life to survive. The quality of water increases with an increase in DO levels. A DO level of 5 mg/l or above is the recommended level for bathing in a river and DO levels over 5 mg/l were found only in two locations closer to where the river enters Delhi, as per the report.