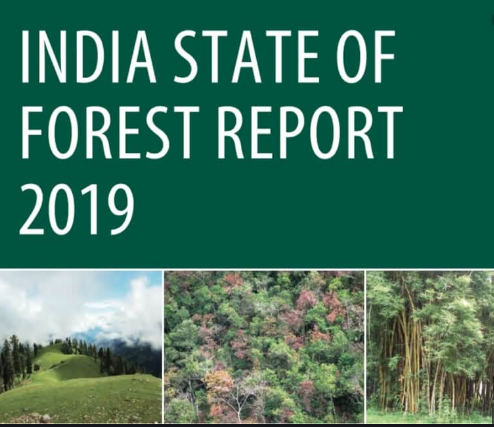 The Union Minister for Environment, Forest and Climate Change, Shri Prakash Javadekar released the biennial “India State of Forest Report (ISFR)”.
* Published by the Forest Survey of India (FSI) in a biennial cycle.
* Starting 1987, 16 assessment have been completed so far.
* ISFR 2019 is the 16th report in the series.

* The total forest and tree cover of the country is 80.73 million hectare which is 24.56 percent of the geographical area of the country.

Madhya Pradesh has the largest forest cover in the country followed by Arunachal Pradesh, Chhattisgarh, Odisha and Maharashtra.
In terms of forest cover as percentage of total geographical area, the top five States are Mizoram (85.41%), Arunachal Pradesh (79.63%), Meghalaya (76.33%), Manipur (75.46%) and Nagaland (75.31%).

* Wetlands within forest areas form important ecosystems and add richness to the biodiversity in forest areas, both of faunal and floral species.
* Due to importance of wetlands, FSI has carried out an exercise at the national level to identify wetlands of more than 1 ha within RFA.
* There are 62,466 wetlands covering 3.8% of the area within the RFA/GW of the country.