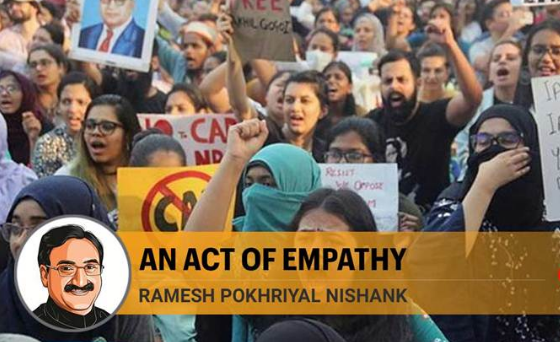 The CAA does not affect any Indian citizens, including Muslims.
We have to understand that the CAA has no role in the deportation of any foreigner.

For centuries, India has welcomed visitors and refugees who brought with them their rich culture, languages, and traditions. Since ages, India has advocated Vasudhaiva Kutumbakam — that the entire earth is one family. Across the world, Indians are known for their extraordinary ability to assimilate different cultures and values.

In 1947, India was partitioned into two independent nation-states:
Hindu-majority India and Muslim-majority Pakistan.
One of the greatest and most painful migrations in human history. Millions of Muslims trekked to West and East Pakistan (Bangladesh) while lakhs of Hindus and Sikhs headed in the opposite direction.

The motive of this Act is to help minority groups who have come to escape persecution in Pakistan, Afghanistan, and Bangladesh, which are Muslim-majority nations.

The CAA seeks to help oppressed illegal immigrants belonging to Hindu, Sikh, Parsi, Buddhist and Christian religions from Pakistan, Afghanistan and Bangladesh, who were forced to flee to India and have lived in India without documentation. In these cases, the standard eligibility criteria for citizenship — 11 years of residence in India — has been relaxed. Shir. Amit Shah has rightly pointed out that the CAA would not have been necessary had the country not faced Partition based on religion. He further said that this law will bring a new dawn in the lives of crores of people.

It must be asserted strongly that all protests should be scrupulously peaceful and any attempt to damage public property or public servants is unacceptable. There are allegations that the CAA violates constitutional provisions.

There are arguments that this Act will facilitate a huge influx of illegal migrants and that illegal migrants will be given citizenship retrospectively. India is a democratic country that ensures fundamental rights to its citizens conferred on them by the Constitution. No statute, including the CAA, can take these away. Certain anti-social elements are spearheading a misinformation campaign.

The northeastern states, in particular, are being targeted to spread this false propaganda. A vicious campaign involving students has been launched to label this Act as anti-Muslim.

The process of deportation takes place as per the mandate of the Foreigners Act, 1946 and/or The Passport (Entry into India) Act, 1920.

In any case, deportation is a judicial process based on inquiries conducted by law enforcement agencies. The interest of northeastern states will be safeguarded under the Sixth Schedule to the Constitution and the statutory protection given to areas covered under the “Inner Line” system of the Bengal Eastern Frontier Regulation, 1873.

In a statement issued by over 1,100 academics from all over the country, it was pointed that the CAA is in perfect sync with the constitutional values of India as it does not debar anyone seeking citizenship based on religion. The support not only came from premiere institutes like IITs and IIMs, Jawaharlal Nehru University, Delhi University, All India Institute of Medical Sciences but also from various international institutions including Princeton University, Oxford, Politecnico di Milano-Milan, the University of Warwick and Imperial College London. The signatories have expressed their complete satisfaction with the way the concerns of the Northeast states have been handled.

Concerns are being raised from different quarters about the violation of Article 14 that guarantees equality and equal protection of law to everyone. We must understand that the CAA proposes to help people under distress. Oppressed minorities are being helped under special circumstances.

As per data obtained from various sources, the minority population has dwindled substantially in Pakistan and Bangladesh.

Now, the question is: What happened to the minority Hindu population?

Right from the beginning, they faced oppression and because of this, they were forced to flee to India. This speaks volumes about the great failure of Nehru-Liaquat pact.

The PM thanked all those who supported and said that the CAA is in complete alignment with India’s centuries-old ethos and a strong belief in humanitarian values. India has always supported the oppressed, helpless and persecuted people.

So, what is new in this Act? India is India because of its rich cultural heritage and its ethos. This Act is about sharing the pain of our brothers and sisters who were forced to move out of their respective countries.