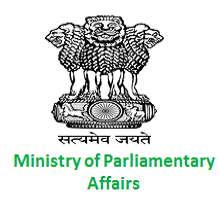 Shri Tomar said that the special achievement of this session of Parliament was that both Houses passed
The 124th Constitutional Amendment Bill -reservation in services and educational institutions for economically weaker sections in general category.
The Right of Children to Free and Compulsory Education (Amendment) Bill, 2019 and
National Council for Teacher Education (Amendment) Bill, 2019 were passed by both Houses of Parliament.

Article 356 of the Constitution of India in relation to the State of Jammu and Kashmir was discussed and adopted in the Lok Sabha on 28.12.2018 and in the Rajya Sabha on 2nd and 3rd January, 2019 respectively.

Interim Budget Session of Parliament 2019 - Productivity of Lok Sabha - 89% and Rajya Sabha - around 8%; 4 Bills passed by both Houses:

A meeting of floor leaders of various political parties in Parliament, chaired by the Union Minister for Home Affairs, Shri Rajnath Singh on 16th February, condemned the cowardly terrorist attack on our security forces in Pulwama. Parliamentary Affairs Minister Shri Narendra Singh Tomar said all political parties, in one voice, condemned the terror attack and observed a two minute silence for the martyred soldiers. A resolution condemning this act of terrorism was also adopted during the meeting, the Minister informed.

The Union Cabinet, chaired by the Prime Minister Shri Narendra Modi, on 24th May gave its approval to the Resolution advising the President to dissolve the Sixteenth Lok Sabha, which was constituted on 18.05.2014. The first meeting of the Sixteenth Lok Sabha was held on June 4, 2014, when members were administered oath and affirmation. The life of the present Lok Sabha is, therefore, to expire on June 3, 2019, unless the President dissolves it earlier.

Shri Narendra Modi chaired Meeting of Presidents of Political Parties; PM announces a Committee to study the issue of ‘One Country, One Election’ threadbare:

The Prime Minister, Shri Narendra Modi, chaired a Meeting of Party Presidents of all political parties having representation in Parliament, on 19th June. Issues that came up for discussion included:

Ways to Improve productivity of Parliament; One Country, One Election; Building a New India in the 75th year of Independence; Programme and commitments to Celebrate Mahatma Gandhi’s 150th birth anniversary; & Development of aspirational Districts.

Union Minister for Defence, Shri Rajnath Singh conducted the meeting. Various Party Presidents emphasized that an atmosphere of discussion and dialogue must prevail in Parliament. Participants in the meeting also expressed the hope that approximately half of the members of the 17th Lok Sabha, are first time MPs, who would take this opportunity to carry forward the spirit of constructive dialogue in the House.

Government held All Party Leaders Meeting to discuss important issues to come up during Budget Session of Parliament 2019;

The Prime Minister exhorted all leaders to cooperate with the Government and strive in the direction of making a New India by 2022 and achieve the true meaning of 'Sabka Saath, Sabka Vikas, Sabka Vishwas'. Shri Modi said that Government is always receptive to the issues raised by all Political Parties and is ready to discuss all issues of national importance on the floor of both Houses of Parliament.

First Session of Parliament After General Elections - productivity of Lok Sabha shoots to 137% and Rajya Sabha rises to 103%; abrogation of Article 370 and Triple Talaq Bills among 30 Bills passed by the Parliament:

Being the first Session of the 17th Lok Sabha, new Members took Oath/Affirmation during the first two days i.e. 17th and 18th June. Election of Speaker, Lok Sabha was held on 19th June.

This Session has been historic in many ways as legislations relating to almost all walks of socioeconomic activities have been passed. A total of 40 Bills (33 in Lok Sabha and 07 in Rajya Sabha) were introduced. 35 Bills were passed by Lok Sabha and 32 Bills were passed by Rajya Sabha. 30 Bills have been passed by both the Houses of Parliament, which is a record in single first/effective Session after constitution of new Lok Sabha.

The Winter Session, 2019 of Parliament which commenced on Monday, the 18th November, 2019 concluded today. The Session provided 20 sittings spread over a period of 26 days.

A special function on the occasion to commemorate 70th Anniversary of adoption of the Constitution of India, - “Samvidhan Diwas” was organized in the Central Hall of Parliament on 26th November. The President of India, Vice President, Prime Minister, Speaker and Minister of Parliamentary Affairs graced the occasion and addressed the gathering of the Members of both Houses of Parliament.

The web-portal of the National Youth Parliament Scheme is available at www.nyps.mpa.gov.in. The main objective of the portal is to increase the outreach of the youth parliament programme of the Ministry to hitherto untouched sections and corners of the country.

Orientation Course on Parliamentary Practices and Procedures for - IAS officers of 2017 Batch:

Inaugurating the Orientation Course in New Delhi on 17th July, the Lok Sabha Speaker, Shri Om Birla said that the Legislative, Executive and Judiciary wings should all fulfil their responsibility to bring a change and give direction to build a New India. He advised the officers to move ahead with an open mind to do justice to the people in an impartial manner.