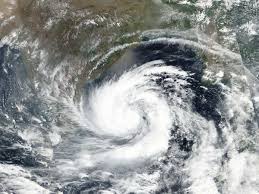 Three persons were killed as super cyclonic storm Amphan made landfall near Sagar Islands in South 24 Parganas district of West Bengal on Wednesday, while a baby died in Bhadrak district of Odisha and a woman drowned in Kendrapara. Thousands of kutcha houses in the coastal parts of West Bengal were damaged.

In Kolkata, wind speeds of 112 km per hour were recorded. Heavy rainfall was reported across all districts of south Bengal. Kolkata streets are deserted due to heavy and continuous downpour in the city due to Cyclone Amphan. A man walks down a street in Kolkata which was inundated with rain due to the heavy rains caused by Cyclone Amphan.

Cyclone Amphan made landfall on the West Bengal Coast with wind speed of 110-120 kmph in Kolkata on Wednesday. A woman purchases vegetables in a heavy downpour due to the impact of the Super Cyclone Amphan in Kolkata.

Waves crash on the banks of the Ganga river in the backdrop of dark clouds covering the sky ahead of Cyclone Amphan's landfall in Kolkata on May 20. Villagers repair a bank that was destroyed by sea waves at Bakkhali due to the landing of Cyclone Amphan, near Sunderbans area in South 24 Parganas district of West Bengal on May 20, 2020.

Policemen remove a damaged structure from a road as super cyclone Amphan makes its landfall, at Rasgovindpur in Mayurbhanj district, Odisha on May 20, 2020. Policeman Muzaffar Mondal braves the downpour due to Cyclone Amphan and stands guard on the Kolkata's arterial Red Road to perform his duty.

In other districts of south Bengal, there were reports of old houses collapsing and trees being uprooted. The weather office has predicted that the cyclonic storm will remain over Gangetic West Bengal in different intensities till Thursday morning.

“Entire south Bengal is hit. South Bengal is finished. The West Bengal government has evacuated three lakh people, two lakh from South 24 Parganas alone. Restrictions have been imposed on the movement of people in Kolkata and adjoining areas, and ferry services have been suspended in the Hooghly.

The Kolkata Airport has suspended the movement of cargo flights for Wednesday. Two lives were lost and power infrastructure was damaged as four coastal districts bore the brunt of the cyclone in Odisha. A three-month-old child died when a wall collapsed in Tihidi block of Bhadrak district. A woman drowned when she had gone for fishing in Kendrapara district.


From the late evening of Tuesday, most coastal districts and some interior areas had started recording heavy rain and strong wind. In the morning, while Dhamra recorded the highest wind speed of 120 kmph, Paradip followed with 106 kmph. The IMD measured wind speed at 91 kmph in Balasore.