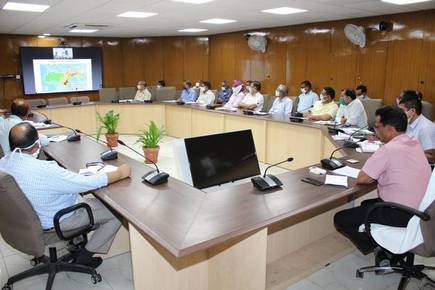 The invasion of locusts had started from the India-Pakistan border on April 11 and they have now crossed the Thar desert and affected 16 of the 33 districts in Rajasthan, taking advantage of favourable wind conditions with the onset of summer. Locust swarms have travelled far in search of food because of lack of vegetation in the agricultural fields after the rabi crop harvest.

State Agriculture Minister Lal Chand Kataria described the locust attack as the biggest threat in the midst of the COVID-19 lockdown, at an official meeting here on Wednesday, while giving instructions for controlling the spread of insects with the cooperation of farmers and through effective surveys.

The locust swarms have reached Sikar, Bundi, Bhilwara, Pratapgarh and Chittorgarh districts, situated far away from the desert.

Kataria said the State government had provided 45 vehicles to Jodhpur-based Locust Warning Organisation of the Union Ministry of Agriculture and Farmers’ Welfare for their sprayers and deployed 70 vehicles for surveys in the fields. With very little crops available in the fields, the locusts are settling on babool and khejri trees in the State, while the Agriculture Department has controlled the outbreak on about 40,000 hectares.

The districts had already prepared contingency plans to deal with the threat in view of last year’s locust attack, he said. Chief Minister Ashok Gehlot had sought Centre’s assistance to deal with the locust attack earlier this month and drawn Prime Minister Narendra Modi’s attention to the need to compensate the farmers for their losses.