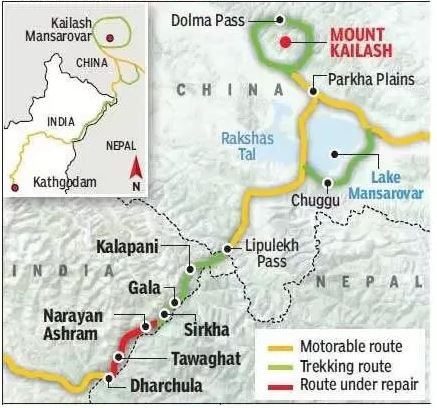 The map showed Kalapani as part of Pithoragarh district. Nepal protested immediately and drew attention to the lingering issue. On May 8, India inaugurated the Darchula-Lipulekh pass link road, cutting across the disputed Kalapani area which is used by Indian pilgrims to Kailash Mansarovar. Nepal hit back by summoning the Indian Ambassador to Nepal, Vinay Mohan Kwatra, to convey a formal protest.

What is the cause of the dispute?

Nepal’s claims to the region is based on this river as it became the marker of the boundary of the kingdom of Nepal following the Treaty of Sugauli signed between the Gurkha rulers of Kathmandu and the East India Company after the Gurkha War/Anglo-Nepal War . Nepal claims that a land mass, high in the mountains that falls to the east of the entire stretch starting from Limpiyadhura downwards, is theirs.

India on the other hand says the border begins at Kalapani which India says is where the river begins. The dispute is mainly because of the varying interpretation of the origin of the river and its various tributaries that slice through the mountains.

While Nepal’s claim of the territory east of Kali is based on the Limpiyadhura origin, India says the river actually takes the name Kali near Kalapani.

Why is Lipulekh pass important?

The Himalayas have several passes that connect the Gangetic region with the Tibetan plateau but Lipulekh is strategically located as it is nearest to the heart of the Indian state or the National Capital Region and can be of particular concern in case of an armed conflict with China.

What are Nepal’s claims regarding Lipulekh pass?

Nepali analysts say that King Mahendra was concerned that India would take military steps to forcefully take the region of Kalapani to secure the mountain pass. He reached an agreement with Delhi and handed over the region for security purposes to India. In 1969, under bilateral negotiations all the posts were removed barring Kalapani. Former Indian Ambassador to Nepal Jayant Prasad says the region was always a part of India and India’s claims to the area are based on British Indian maps dating back to the 19th century.

When pilgrimage to Kailash Mansarovar paused with the takeover of Tibet by Chinese forces in the mid-1950s, India deployed troops at the Lipulekh pass in 1959, according to Mr. Prasad, who was part of the Eminent Persons Group formed in February 2016 to ensure frank conversation between India and Nepal on controversial issues.

What is the current position?

Nepal has published a revised official map incorporating the territory from the Limpiyadhura source of the Kali to Kalapani and Lipulekh pass in the northeast of the triangular region as its territory.