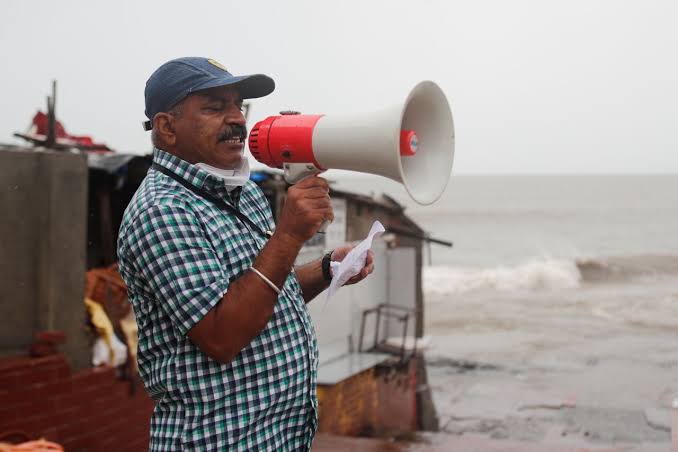 Maximum City on red alert as cyclone set to make landfall near Alibaug.

All activity that was set to resume from Wednesday in the State would remain suspended for two more days, he said.
Along with IMD’s red alert, a storm surge warning for Mumbai was also issued. “Storm surge of 1-2 metres above astronomical tide is very likely to inundate low-lying areas of Mumbai during the time of landfall,” the warning read.

The deep depression in the Arabian Sea intensified into cyclonic storm Nisarga on Tuesday and lay centred over east central Arabian Sea, 380 km south-southwest of Mumbai. The cyclone will move northwards, recurve north-northeastwards and cross north Maharashtra between Harihareshwar and Daman, close to Alibaug, on Wednesday afternoon. It is projected to have windspeeds of about 110 kmph as it makes landfall. This is the first cyclone to form near Mumbai in the Arabian Sea since 1882.

The IMD has issued a red alert and a storm surge warning for Mumbai. “Storm surge of 1-2 metres above astronomical tide is very likely to inundate low lying areas of Mumbai during the time of landfall,” IMD said. Since the cyclone will pass over Maharashtra and weaken, the IMD has not issued a warning for Mumbai, Thane and Raigad districts for Thursday. It has issued a green alert for Mumbai and an orange alert for Palghar.

Shubhangi Bhute, senior scientist, IMD Mumbai, said, “The cyclone will make landfall near Alibaug on Wednesday afternoon owing to which Mumbai will experience high wind speed. A few parts of Mumbai witnessed light rain on Tuesday evening and daytime temperatures dropped to 32.4 degrees Celsius from 34 degrees Celsius on Monday. on Tuesday, Mumbai had received 11 mm rainfall. The IMD said conditions will be favourable for the onset of monsoon in Mumbai only when the cyclone moves away from the region.

Some aircraft have flown out of Mumbai until the cyclone passes while others have been asked to park inside the hangar.

The circular was being issued to operators and pilots to reiterate some existing guidelines on adverse weather operations and suggested measures “to cater for the gap in flying of pilots”, it said.