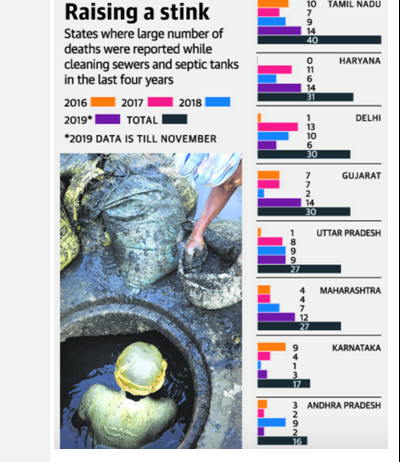 The Ministry of Social Justice and Empowerment said in a response to a question in Rajya Sabha that "282 people have died while cleaning sewers and septic tanks in the country between 2016 and November 2019".

Sanitation is a State subject, the people for cleaning of sewers and septic tanks are employed by local bodies.

States and Union Territories have been requested to ensure filing of FIR's and prosecution in all cases of employment of persons for hazardous cleaning of sewers as per the provisions of The Prohibition of Employment as Manual Scavengers and their Rehabilitation Act 2013,

Law on Manual Scavenging
1. Prohibition of Employment as Manual Scavengers and their Rehabilitation Act, 2013 provides for the prohibition of employment as manual scavengers, rehabilitation of manual scavengers and their families.
2. Section 7 of the Act prohibits any person, local authority or any agency to engage or employ people for hazardous cleaning of sewers and septic tanks. Violation of the provision provides for imprisonment which may extend to two years.
3. Section 13 of the Act provides for rehabilitation of persons identified as manual scavengers by a Municipality.
4. However, the law is not properly enforced and people are forced to do manual scavenging.
Ignoring worker's safety norms
5. The requirements of worker safety and provision of safety norms in cases of human intervention are often ignored leading to death of persons involved in such cases of manual scavenging.
6. In the absence of political will and social pressure, more lives could be lost as more tanks are being built in rural and urban areas as part of the drive to construct toilets.

What can be done?

Local Authorities must find resources to employ machines for cleaning of septic tanks and sewers.

The Swachh Bharat Abhiyan should make expansion of the sewer network a top priority and come up with a scheme for scientific maintenance of tanks as it will also help in ending manual cleaning of septic tanks.

Two components of Swachh Bharat Abhiyan (SBM) i.e. SBM-Rural and SBM-Urban must look into the issue of sanitation and use funds available for SBM in providing mechanised way of cleaning septic tanks.

Mechanised cleaning of sewers and tanks will reduce inequality especially for such communities who have been traditionally involved in manual scavenging.