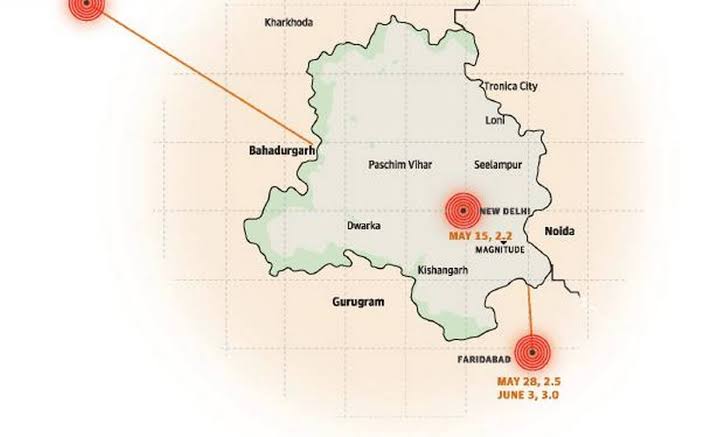 Since May 15, the National Center for Seismology has recorded seven small earthquakes, ranging from 1.8 to 4.5 on the Richter scale, with epicentres at Faridabad, Rohtak and New Delhi.

“There is something called background seismicity level, which continues over a region over time and that is normal for it. Such tremors have been occurring in this region for the last 40-50 years. That would be a cause for concern only if they occurred in regions where tectonic plates met,” he said. Only larger faults and larger systems trigger bigger earthquakes, explained Kusala Rajendran of Centre for Earth Sciences at Indian Institute of Science in Bangalore.

“That is why you have great earthquakes only along the plate boundaries such as the Sumatra plate boundary , Andaman plate boundary or Himalaya and California,” she said, while reiterating that Delhi had a history of only small tremors.

Concerns about the risk of a major earthquake in Delhi, however, may not be unfounded. “An earthquake of 5.5 to 6 magnitude can never be ruled out anywhere,” said Dr. Rajendran, citing the instance of the 1993 earthquake in Latur, Maharashtra. At that time, the area fell under zone 1 of the country’s seismic zonal maps, which was the category with least risk. With a magnitude of 6.2 on the Richter scale, the earthquake left thousands dead.

Rajendran, adding that it is very close to the most active fault line in the world. Several researchers have hypothesised the probability of a great earthquake, something of the magnitude of eight and above, striking the Himalayan region. Rajendran said that such an event has not taken place in the area for at least a 1,000 years.

“Even a strong earthquake in the Himalayan belt may pose a threat to Delhi-NCR,” said Dr. Rajendran pointed to an earthquake in Uttarakhand’s Chamoli district in March 1999, measuring 6.5 on the Richter scale, which caused damage to some buildings in Patparganj in Delhi, 280 km from the epicentre.

Drawing parallels with an earthquake that took place in 1803 near Garhwal in Uttarakhand and reportedly led to the toppling of a minaret of the Qutub Minar in Delhi, Dr. Gahalaut said that we need to be concerned about the consequences of a Himalayan earthquake on cities such as Delhi, Kanpur, Lucknow, Banaras and others in the Indo-Gangetic plains.

He opined that the NCR would not be able to withstand such an earthquake, given the unplanned manner in which building constructions are carried out. However, there is no definite answer to when a massive earthquake would occur.