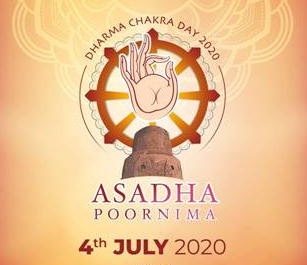 *July 4 , 2020, President of India Shri Ram Nath Kovind has virtually inaugurated the celebrations for the Dharma Chakra Day 2020 Organized by International Buddhist Confederation (IBC), in Partnership with Union Ministry of Culture, from the Rashtrapati Bhawan at New Delhi .

* The occasion of Asadha Poornima (Guru Purnima) , a Full Moon day or Purnima that occurs in the Hindu month of Ashadha (July) as per Indian sun calendar.

*The Minister of Culture Prahlad Patel and Minister of State for Minorities Affairs, Kiren Rijiju also addressed the opening ceremony.

*The event is expected to be witnessed by around 30 lakh devotees worldwide via live webcast.

*In keeping with the historical legacy of India being the land of Buddha's enlightenment, his turning the wheels of Dharma, and Mahaparinirvana.

*This day is also celebrated by Buddhists and Hindus as Guru Purnima to show respect to their gurus.

*Before Asadha Poornima, Buddha Poornima or Vesak day (May 7, 2020) and Global Prayer Week from May 7- 16, 2020 have been celebrated jointly by the Ministry of Culture, with the participation of all the supreme heads of Buddhist associations around the world in collaboration with IBC, a global Buddhist composite organization. PM was participated in the ceremony.

*It is to be noted that the Asadha Poornima, which is the second most sacred day for Buddhists after the Buddha Poornima or Vesak, is also known as Esala Poya in Sri Lanka and Asanha Bucha in Thailand.