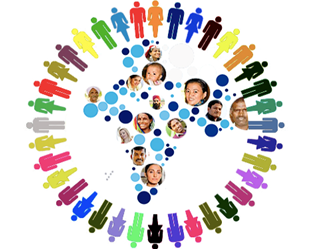 What connects the NPR, NRIC and Census

In a recent address, Home Minister of India has floated the idea of One Nation, One Card and asserted that the National Register of Citizens (NRC) would be implemented across the country. He also highlighted about the idea to resurrect National Population Register (NPR) all over again despite successful implementation of Aadhaar Card. So let us understand about National Population Register and how is it different from National Register of Citizens (NRC) and Aadhaar Card.

The National Population Register (NPR) is a comprehensive identity database maintained by the Registrar General and Census Commissioner of India under Ministry of Home Affairs.

It is a Register of usual residents of the country and will be prepared at the local, sub-district, district, state and national level.

The NPR is being prepared under provisions of the Citizenship Act 1955 and the Citizenship (Registration of Citizens and issue of National Identity Cards) Rules, 2003. It is mandatory for every usual resident of India to register in the NPR.

As per section 14A of Citizenship Act 1955, it is compulsory for every citizen of the country to register in the National Register of Indian Citizens (NRIC). The creation of NPR is the first step towards preparations of NRIC.

According to the Ministry of Home Affairs, usual resident of the country is one who has been residing in a local area for at least the last 6 months or intends to stay in a particular location for the next six months.

Citizens & Foreigners - Unlike the NRC, the National Population Register will not only include citizens but also foreigners as it would record even a foreigner staying in a locality for more than six months. The NPR database would contain demographic as well as biometric details.

The data for the NPR were first collected in 2010 along with the house listing phase of Census 2011. In 2015, this data was further updated by conducting a door-to-door survey. Earlier, the roll out of NPR had slowed down due to overlapping with that of Aadhaar.

NPR will again be conducted in conjunction with the house listing phase from 1st April 2020 till 30th September 2020 - the first phase of the Census 2021 - by the Office of the Registrar General of India (RGI) under the Home Ministry for Census 2021. Only Assam will not be included, given the recently completed NRC.

How to Register for NPR

During the first phase of Census 2011, enumerators have visited every household and have collected the details required for the NPR in a paper format. These forms have been scanned and the data has been entered into an electronic database in two languages - the State language and in English.

Biometric attributes - photograph, ten fingerprints and two iris images are being added to the NPR database by organizing enrolment camps in each local area. The enrolment will be done in the presence of Government servants appointed for this purpose.
All usual residents who are above 5 years of age will have to attend the enrolment camp even if their biometrics have been captured under Aadhaar. For persons not enrolled under Aadhaar, they can also register themselves in the enrolment camps.

If the household has not been covered during 2011 Census or if the individual has changed residence after 2011 Census, then they will have to fill up another form provided by government officials. These forms will be verified by the authorities and the individual's biometric details will be captured during the next round of biometric camps.

Two camps will be held in every local area. If an individual misses the first camp, intimation will be provided to attend the second camp. In case, the second camp is also missed, government will allow to enrol at camps that would be set up at sub-district level until a designated date. After the date, if the individual does not enrol under NPR, then his/her name will be struck off the list.

Objectives & Benefits of the massive exercise of NPR

The objective of the NPR is to create a comprehensive identity database of every usual resident in the country and to help in better utilization and implementation of the benefits and services under the government schemes, improve planning and security in the country. The database would contain demographic as well as biometric particulars.

It will provide solution to multifarious problems facing the country that range from effective maintenance of law and order to efficient implantation of welfare schemes like MGNREGS, food security and nutrition campaigns etc.

Updation of NPR will help in tracking criminal activities, and better planning and execution of government schemes. The NPR links biometric and demographic details of any ordinary resident, thus making it a comprehensive database of residents.

Data collected in NPR will be sent to Unique Identification Authority of India (UIDAI) for de-duplication and issue of Aadhaar number.