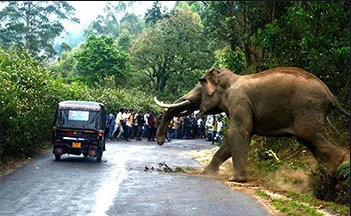 NEWS:
Prakash Javadekar, MoEFCC launched the booklet on “Best practices of Human-Elephant Conflict Management in India” to strengthen coexistence of the human-elephant, along with the Beta Version of “Surakhsya” during the event on the eve of World Elephant Day.

The booklet was aimed to reduce the Human Elephant conflicts and avoid the loss of lives of both humans and elephants.

The ministry is working on providing food and water to the animals in the forests to reduce the increasing cases of the conflicts between humans and animals.

To save the Elephants and other wild animals India is working on practical and cost effective solutions to end the conflicts between humans and animals.

Prakash Javadekar stressed the need of capacity building and training of forest staff to end the human animal conflicts.

The booklet is a pictorial guide of a variety of management inventions which was successfully adopted by the elephant range states.

It serves as a reference manual for adoption of the best possible site specific mitigation measures that can be adopted to reduce human elephant conflict.

i.Javadekar and Supriyo along with the officials of the Ministry also launched a beta version of a portal on Human-Elephants Conflict called “Surakhsya”, a collection of real time information and supports managing conflicts on a real time basis.

ii.The beta version was launched before for data testing which will be introduced in all the states across India within the end of 2020.

The 12th of August of every year is celebrated as the World Elephant Day all across the globe to support the preservation and protection of Elephants all over the world.

To create awareness about the conservation of Elephants.
To share the solutions for a better protection and management of wild and captive elephants.
The International Union for Conservation of Nature(IUCN) has enlisted the Asian Elephants as Endangered on its red list of threatened species.