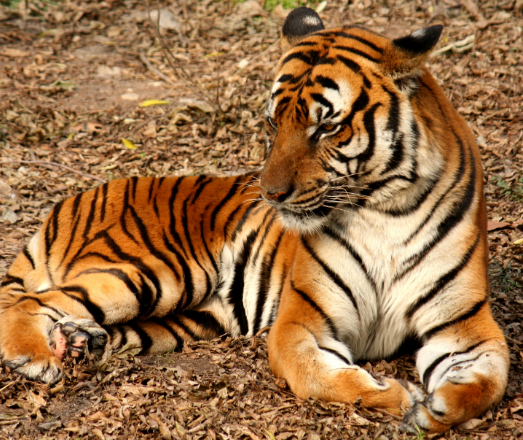 Does india emphasize more on tiger conservation at the cost of others?

The most recent estimation of tiger population in India has noted that there has been an increase in tigers from about 2,000 in 1970 to around 3,000 presently.

Despite the increase in the tiger population in India, a leading tiger expert in India, points out serious concerns regarding tiger conservation efforts in India.

Despite, the fact that Tiger population has increased in India and despite India having done better than other tiger range countries, the annual growth rate remains very low.

Given the expansive land base of India, it has the potential to hold 10,000 to 15,000 wild tigers. However there seems to be no goal or plan to realize this potential.

The tiger population recovery has not been even throughout the country and has only been sporadic in a few reserves.

The governments have been investing heavily, but not very intelligently, in tiger conservation. Excessive funding of a few reserves while neglecting large areas with greater recovery potential have become a concern.
There seems to be the emphasis on the massively funded eco-development activities in tiger reserves. This calls into question the efficiency of the investments.
The article laments that the unnecessary and massive borrowings from the Global Environment Facility-World Bank combine to create new models for tiger recovery.

A major concern of the current conservation policy is the government monopoly over tiger management which has led to the lack of data transparency and rigorous, independent tiger monitoring.

Government monopoly over domains of tiger conservation such as tiger research, monitoring, nature education, tourism and conflict mitigation should be done away with and the private enterprises, local communities, NGOs and scientific institutions should be involved in tiger conservation efforts.
Sustainable development:

There is the need to recognize the existing challenges in tiger conservation and address them in future policies.
The slow growth of the economy has resulted in widespread poverty. This has resulted in excessive reliance on forest exploitation for livelihoods and protein dependency on wild meat that is driving wildlife hunting.
There is the need to adopt a more sustainable model of development balancing the need to conserve the environment while also addressing the need for human development.