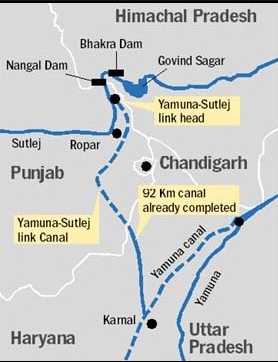 Punjab’s viewpoint on the issue of the Sutlej-Yamuna Link (SYL) canal, given Punjab’s critical groundwater situation.

The Satluj Yamuna Link Canal is a proposed 214-kilometer long canal to connect the Sutlej and Yamuna rivers.
The proposal met obstacles and was referred to the Supreme Court.
It defines river water sharing between Punjab and Haryana.

In 1966, with the reorganisation of Punjab state, it was decided that the new state of Haryana would get a share of the Sutlej River water.
Punjab was opposed to sharing waters of the Ravi and Beas with Haryana, citing riparian principles, and arguing that it had no water to spare.
In 1976, the Centre issued a notification allocating to Haryana 3.5 million acre-feet (MAF) out of undivided Punjab’s 7.2 MAF.
Subsequently, a tribunal headed by Supreme Court Judge V Balakrishna Eradi was set up to reassess the availability and sharing of water.
In 1987, the tribunal recommended an increase in the shares of Punjab and Haryana to 5 MAF and 3.83 MAF, respectively.
To enable Haryana to use its share of the waters of the Sutlej and its tributary Beas, a canal linking the Sutlej with the Yamuna, cutting across the state, was planned.
A tripartite agreement was also negotiated between Punjab, Haryana, and Rajasthan in this regard.

Why is Punjab not willing to share the River Water?

Punjab is facing a severe water crisis due to over-exploitation of its underground aquifers for the wheat/paddy monocycle.
According to the Central Underground Water Authority’s report, its underground water is over-exploited to meet the agriculture requirements in about 79 percent area of the state.