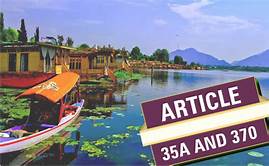 Government considering special status for the Union Territories of Jammu and Kashmir and Ladakh.

The Central government had revoked the special status of Jammu and Kashmir under Article 370 and Article 35A of the Constitution on 6th August 2019.

The state of Jammu and Kashmir was bifurcated into two Union Territories of J&K and Ladakh.

Article 35A enabled the J&K legislature to decide the “permanent residents” of the State. It ensured job reservation for its residents and allowed the state to prohibit a non-J&K resident from buying a property in the State.

Post the revoking of Article 35A, several sections and groups from Jammu and Kashmir had expressed concerns about losing their special status and apprehension of losing land and jobs to outsiders.

The Centre is considering a proposal to grant special status to J&K through the provision of Article 371.
The proposed move will provide protection to domiciles of Jammu and Kashmir in government jobs, educational institutions and land rights.

The major provision under consideration involves implementing the mandatory requirement of continuous stay in the region for a minimum of 15 years before applying for a job in the government sector. This will ensure that the locals will be more likely to get government jobs in the state.

Special provisions are being examined on the lines of those in Himachal Pradesh and Uttarakhand with regard to land rights. The provisions pertain to regulating ownership and transfer of land to conserve the limited resources available for development. This will ensure land ownership remains within the residents of the state.

The proposed regulations will ensure that the State of Jammu and Kashmir preserves its unique identity.

There are 12 States including Himachal Pradesh where provisions of special status under Article 371 of the Constitution apply.