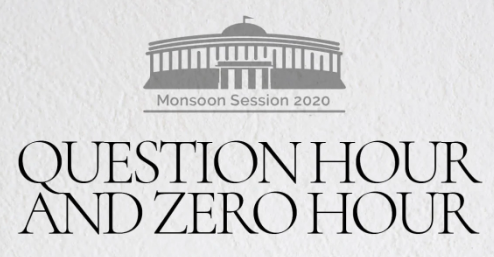 News:
The Lok Sabha Secretariat has released the schedule for the monsoon Parliament session.

In view of the pandemic and a truncated Monsoon Session, Parliament has dropped Question Hour and curtailed Zero Hour.
Stating that the Parliament is being held in the midst of an extraordinary situation, the Question Hour has been dropped from the schedule.
The move has been strongly criticised by the opposition.

What is Question Hour, and what is its significance?

The first hour of every parliamentary sitting is termed as Question hour.
It is mentioned in the Rules of Procedure of the House.
It is during Question hour that the members ask questions and the ministers usually give answers.

What is Zero Hour?

Zero Hour is the time when Members of Parliament (MPs) can raise Issues of Urgent Public Importance.
The Zero Hour starts at 12 noon immediately following the Question Hour.
For raising matters during the Zero Hour, MPs must give the notice before 10 am to the Speaker/Chairman on the day of the sitting. The notice must state the subject they wish to raise in the House.
However, Speaker, Lok Sabha/Chairman, Rajya Sabha may allow or decline a Member to raise a matter of importance. ‘Zero Hour’ is not mentioned in the Rules of Procedure. It is an Indian parliamentary innovation.
Thus, it is an informal device available to MPs to raise matters without any notice 10 days in advance.
This is because, generally, the matters are of public importance and such matters cannot wait for 10 days.