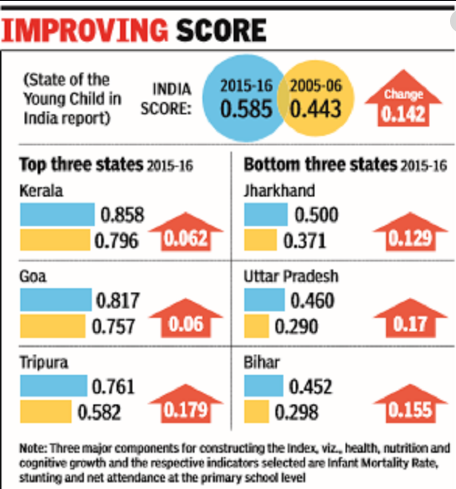 The ‘State of the Young Child’ in India report was launched by Mr. M. VENKAIAH NAIDU

Two indices have been released as a part of the ‘State of the Young Child’ in India report.
It has been brought out by non-governmental organisation Mobile Creches.

The young child outcomes index measures health, nutrition and cognitive growth with the help of indicators such as infant mortality rate, stunting and net attendance at the primary school level.
The index has been constructed for two time periods (2005–2006 and 2015–2016) to enable inter-State comparisons as well as provide an idea of change over time.

Kerala, Goa, Tripura, Tamil Nadu and Mizoram are among the top five states for the well-being of children.

It identifies eight states that have scores below the country’s average: they are Assam, Meghalaya, Rajasthan, Chhattisgarh, Madhya Pradesh, Jharkhand, Uttar Pradesh and Bihar.

The index has been launched to understand the policy and environment enablers that influence a child’s well-being.
It uses five policy enablers that influence child well-being outcomes, including poverty alleviation, strengthening primary healthcare, improving education levels, safe water supply and promotion of gender equity.
The environment index was constructed for 2015–2016 only due to limitations of data availability.

According to the environment index, Kerala, Goa, Sikkim, Punjab and Himachal Pradesh secured the top five positions.
The eight states that have a below-average score on the outcomes index also fared poorly on this one.

The report points out that while the budgetary allocation for the Ministry of Women and Child Development has seen a year-on-year increase, all the additional funds have been allocated towards nutrition delivery under the Integrated Child Development Scheme (ICDS).

While the population of children under six years of age is 158.8 million, the ICDS covers only 71.9 million children as calculated from the total number of beneficiaries across states.

According to its analysis on expenses towards child nutrition, healthcare, education and other necessary protection services, India spent Rs.1,723 per child in 2018–2019, an amount that is insufficient and fails to reach the entire eligible population.

The report calls for an increase in public spending on children