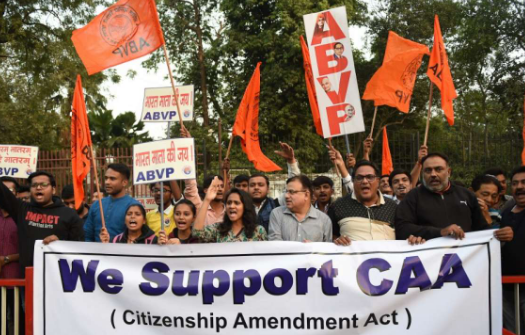 Trying to repair the damage while pushing ahead with their divisive agenda, the regime’s spokespersons have repeatedly asserted that the recently approved National Population Register (NPR) is not new, not related to the NRC, and not something to worry about.

Widespread protests against the National Register of Citizens (NRC) and the Citizenship (Amendment) Act, or CAA, 2019, have severely dented the image of the Narendra Modi government.

The addition of unnecessary intrusive questions — on the place and date of birth of each parent, place of last residence, and Aadhaar, PAN (Permanent Account Number), driving licence, voter card and mobile phone numbers makes it far more potent as an instrument of surveillance and harassment.
It is indeed true that the NPR is envisioned in the Citizenship Act of 1955, and that it was revived by the Atal Bihari Vajpayeeled National Democratic Alliance (NDA) government when it amended the citizenship Act and rules in 2003.

Norms of good governance dictate that the scope of individuating data be restricted, and that, on the other hand, databases with universal or wide coverage be confined to aggregated data that cannot identify individuals.

Group-oriented data also begins with particular persons, but aggregation masks or “anonymises” them, thus yielding information only on collectivities such as illiterate persons or tax payers.

In fact, unpublished census data cannot be accessed by government departments, and Section 15 of the Census Act exempts it from the Indian Evidence Act so that it cannot be used in courts of law.

The Census Act, 1948 requires all persons residing on Indian territory to truthfully answer the schedules canvassed by the enumerators of the Census of India — failure to do so is punishable with a fine.

The probable consequences of this reversal are illustrated by the contrary example of the Indian census, where the assurance of anonymity balances the coercive legal force of the state.

However, most Indians may not be aware that Section 11 of the same Act imposes even higher penalties on officials who falsify or disclose census data – they may also be jailed for three years.

To appreciate the full significance of this commitment to anonymity, consider the fact that the 2011 Census revealed that, between 2007 and 2011, 74 lakh Indians were married below the legal age of 18.

And yet the Census data cannot be used to identify them — it can only tell us, at best, that the incidence of under-age marriages is the highest in districts like Bhilwara and Chittorgarh, Rajasthan.

To be sure, states do need to collect individuating data, which is usually justified by invoking national security or the efficient targeting of welfare benefits.

Faith in the state

In ex-colonies such as India that have won their independence through a freedom struggle, the post-colonial state gains a priceless inheritance of popular trust.

After all, most people are unaware of the safeguards for anonymity built into the census; and yet they freely provide information because they trust the government.

What then? The only “plan” the government seems to have is to convert these ‘x’lakh self-supporting persons, who have presumably contributed to their local economies, into permanent inmates of detention centres and eternal wards of the state

Laws are not necessarily meant to abolish whatever they render illegal; they are meant to trap particular subjects and practices in zones of illegality where they will be most susceptible to power.

The NPR-NRC and CAA initiatives seem designed to coerce us into legalising the unjustifiable and normalising indefensible prejudices.

Graded or hierarchical citizenship has been unjustifiable in our republic, though it has been integral to our social practice.

First, that civil liberties and democratic rights are defined by the inconvenient fact that they must also be granted to those whom we may fear, hate or despise.