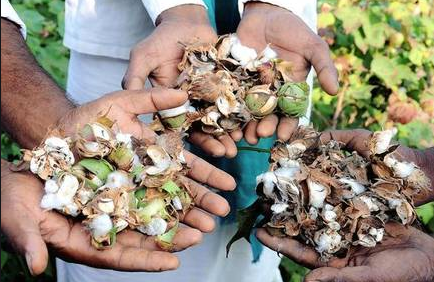 Bt Cotton: It is a genetically modified cotton. It contains the pesticide gene from bacteria Bacillus thuringiensis (Bt). It has now been grown in the country for almost 20 years.

According to the Ministry of Agriculture, from 2005, adoption of Bt cotton rose to 81% in 2007, and up to 93% in 2011. A lot of studies have proclaimed Bt Cotton to be the panacea for dwindling yields and pesticide expenses. WIth the passing of 20 years, the performance of Bt Cotton is being reviewed.

The resistance to pests reduces the plants’ vulnerability to pest attacks and thus helps increase the yield from the plant.
One study has noted that the adoption of Bt cotton is said to have increased cotton production from India by three times between 2002-2014.
The inherent resistance to pest attacks would also help reduce insecticide spraying on the cotton plant.
This would help reduce the cost of cotton cultivation for the farmers and also would ensure better safety for the farmers due to reduced exposure of farmers to toxic insecticides and pesticides.
The use of Bt cotton would also lead to some environmental benefits.
The reduced pesticide usage would lead to lesser environmental pollution by these harmful chemicals.
Also, the targeted strategy against only the relevant pests through Bt cotton would eliminate the threat posed by pesticides which eliminate all the insects in the field even if they are not harmful to the crop. This would have a detrimental impact on the biodiversity and may lead to undesired effects like imbalances in the food chain and may also degrade soil fertility.

Concerns with respect to Bt cotton:

Recent studies have questioned the yield improvements being attributed to the adoption of Bt. Cotton.
They note that the contribution of Bt cotton to yield increase was only about 4% each year and the current yields were lower than in the initial years of Bt adoption.
The rise in cotton yields can be explained by improvements in irrigation and a dramatic growth across the country in the use of fertilizers.
Gross fertilizer use for cotton more than doubled from 2007-2013; the average rose from 98 kg/ha in 2003 to 224 kg/ha in 2013.
Some countries that don’t have Bt, hybrids or good access to inputs have been able to match India’s cotton productivity.

There are indications that the PBW has developed a resistance to Bt cotton in India. Bollworm spraying has begun to increase. With rising acreage under Bt cotton cultivation, expenditures for spraying for sucking pests also went up.
By 2018, farmers were spending an average of $23.58 per hectare on insecticide — 37% more than the pre-Bt levels.

The growing share of Bt Cotton has led to the neglect of the desi varieties.
The cost of ignoring ‘desi’ varieties would lead to loss of the biological potential and diversity offered by these.
The desi varieties resist many pests and don’t present the problems faced by hybrids.
The hybrid varieties cannot resist a variety of local pests and require more fertilizers and pesticides. The increasing use of man-made pesticides to control pests has led to the emergence of resistant pests. Resistant Pink and even American Bollworm (ABW), a minor pest in the past, began increasing, leading to the growing use of a variety of pesticides.

Despite finding huge favour in India, the GM crop has only brought modest and short-lived benefits. This should guide India’s choices when it comes to other Bt crops such as brinjal.

Research suggests that with pure-line cotton varieties, high-density planting, and short-season plants, cotton yields in India can be substantially increased and also such varieties stand a better chance at withstanding the vagaries of climate change.
There is a need for a comprehensive government policy for supporting ‘desi’ varieties.