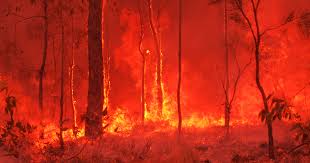 A continent on fire: on Australia wildfires-Editorial-The HIndu-10-01-2020

Australia’s catastrophic fire season that began in August last year is unprecedented, and has caused large scale destruction, mainly in New South Wales (NSW) and Queensland. Fire is no stranger to the dry continent’s woodlands, but the inferno this time has devastated over 10 million hectares of land, killing at least 25 people and tens of millions of animals, besides forcing the evacuation of entire communities. Shocking images of kangaroos burnt in their tracks as they tried to flee and koalas desperately escaping the fire are indelibly imprinted in the consciousness of people around the world. This is a moment of reckoning for Australia. The government of Prime Minister Scott Morrison, who has sought to downplay the impact of changing climate, is struggling to pacify angry citizens who are calling for a reconsideration of the country’s relationship with fossil fuels. Warnings have been sounded by scientists that even with a global average temperature rise of 1°C, the raging fires have engulfed an area the size of Switzerland. In a world set to warm at least half a degree more in coming decades, Australia’s encounters with devastating fires could become more frequent, perhaps even once in eight years, making large parts of the continent uninhabitable. The current fire season presents a cross-roads, and a wise choice would be to move to a greener future, one that strengthens an already diverse economy through innovation.
Fire is no stranger to Australia but the fires now burning across the nation have been described as unprecedented with over 10 million hectares of land damaged, killing at least 25 people and tens of millions of animals, besides forcing the evacuation of communities.

Bushfires are actually a part of Australia’s ecosystem. Many plants depend on them to cycle nutrients and clear vegetation. In fact, eucalyptus trees in Australia depend on fire to release their seeds. But all this usually happens during a few weeks in late January-February, when the country is at its driest. The prolonged blaze in 2020 has coincided with Australia’s harshest summer.

Much of Australia is facing a drought that is a result of three consecutive summers with very little precipitation. This, according to climate scientists, is unprecedented.

Australian Bureau of Meteorology’s 2018 State of the Climate report notes, “Australia’s climate has warmed by just over 1 degree Celsius since 1910, leading to an increase in the frequency of extreme heat events.” This has led to more rainfall in northern Australia, but created drought-like conditions in the more densely populated southeast.

Political decisions of the Government criticized:

The Government has sought to downplay the impact of changing climate.It ignored calls from fire experts to prepare in advance to reduce the damages due to fire. Australia is a major producer of fossil fuels, and among the world’s top exporters of coal and liquefied natural gas.The Prime Minister has further pledged to maintain Australia’s position as a world-leading coal exporter. It continues to support aggressive development without giving importance to the environment and sustainable development.
The government has prioritized the needs of business over action to cut carbon emissions.

Australia’s encounters with devastating fires could become more frequent, perhaps even once in eight years, making large parts of the continent uninhabitable. Australia is home to nearly 250 animal species, some of them like the koalas and kangaroos are not found elsewhere. But the region also has the highest rate of native animals going extinct over the past 200 years. The fires will aggravate this situation.
The fires have also caused a drop in the bird, rodent and insect populations. These creatures are the building blocks of the ecosystem and the fall in their population is bound to have long-term impacts.

The situation is bound to worsen without policy change, as temperatures are predicted to soar to 50°C.
Over the past half-century, the number of hot days and very hot days each year have steadily increased. It would be tragic if this scientific insight is ignored. Long-term prosperity for Australians and a future for its charismatic animals can be secured only through policies that foster environmental protection.