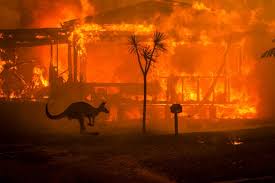 Why are bushfires raging in Australia?-Editorial-The Hindu-12-01-2020

The Worst Bushfires in Australian History.

Australia’s bushfires have razed more than 10.3 million hectares (103,300 sq km) of land roughly the size of South Korea — since September.
News agencies reported that 27 people and up to a billion animals have been killed and thousands subjected to repeat evacuations as the unpredictable fires spread over large areas in the east and south-east. An extended weather reported in one country (wet monsoon in India) appears to have translated into an unmitigated disaster half a world away for another (delayed monsoon, dryness, drought and wildfires in Australia.

The rare flora and fauna species of the continent have been affected by the raging fires. The reports point out that up to a billion animals may have been killed.

The monsoon winds cover the whole Indian Ocean region involving areas both north and south of the equator. The movement of monsoon winds corresponds to the natural occurrence of troughs and ridges in the region. Every trough is matched by a crest.
Troughs represent areas of low pressure featuring ascending motion of air. It observes cooling effect due to the ascending motion, formation of clouds and occurrence of rain.
Ridges represent areas of high pressure featuring descending motion of air. It is characterized by dryness, heat and absence of clouds and rain.

Delay in Retreating monsoon from India:

The 2019 June-September monsoon in India started its withdrawal on October 9, against the normal date of September 1, making it the most delayed in recorded history.
The monsoon of 2019 was also the strongest in recent years with a surplus of 10% in 2019, both attributed in part due to the positive phase of the Indian Ocean Dipole (IOD).

During a positive IOD phase, the western Indian Ocean region warms up anomalously and leads to a creation of a low-pressure region as compared to the eastern Indian Ocean region which is characterized by higher pressure and a dry phase.
The positive IOD persisted longer than usual and remained active starting from May 2019, peaked in October-November and started decaying only during the first week of January 2020.
The IOD breakdown occurs when the monsoon trough moves from India into the southern hemisphere in early December.

This longer than usual positive IOD may have contributed to a delay in the transition of the monsoon trough from the Northern Hemisphere to the Southern Hemisphere and the subsequent onset of the Australian monsoon.

The extended weather characterized by a strong monsoon in India appears to have translated into a delayed monsoon in Australia. Australia faces water stress given its dependence on the monsoons. The deficient monsoons led to a drought-like situation in Australia.
The resulting drought and heat have seen Australia grapple with fire over many parts of the country from September 2019.
The timely arrival of the monsoon rains could have helped the governments contain the spread of the fires which is a common occurrence in Australia. The delay in the arrival of the monsoons well past the normal December-end timeline seems to have worsened the conditions.

South-east Australia has been abnormally dry since September 2019 under prevailing positive IOD conditions, which means that it would need bouts of significant rainfall to have an impact on the fire risk.
Given the delay in monsoon rains in Australia and the fact that Australia is only just entering its summer season, the risk of additional fires remains high.

The fires linked to climate change:

Scientists and researchers have argued that unfolding fire disaster can be attributed to climate change. In recent years, Australia has experienced longer dry conditions and exceptionally low rainfall.
Experts say climate change has worsened the scope and impact of natural disasters such as fires and floods. Weather conditions are growing more extreme, and for years, the fires have been starting earlier in the season and spreading with greater intensity.

The fire disaster seems to be a symptom of the larger problem of climate change. The failure of the global climate action to act decisively is a cause of great concern.

There have been counter-arguments which claim that a big wave of arson may have fuelled the raging bushfires with people deliberately igniting fires.

There are concerns that the mindless politicisation of climate change issue may divert the attention towards the need for urgent action and may lead to a lot of misinformation on social media.