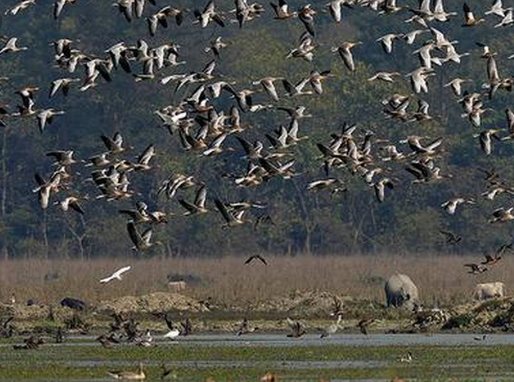 Kaziranga National park has recorded 96 species of wetland birds, which is one of the highest for wildlife reserves in India.

The survey has observed an increase in not just the total number of birds, but also the no of different species and the families. A notable improvement has been observed compared to the first wetland bird survey in Kaziranga (2018).

The wetlands constitute the major portion and also nourish Kaziranga’s ecosystem.
Data on wetland birds is important given that an increase or decrease in the number of birds is indicative of the park’s health.

Kaziranga National Park is a national parkin the state of Assam, India. The sanctuary, which hosts two-thirds of the world’s great one-horned rhinoceroses, is a UNESCO World Heritage Site since 1985.

Located on the edge of the Eastern Himalayan biodiversity hotspot, the park combines high species diversity and visibility.

Kaziranga is a vast expanse of tall elephant grass, marshland, and dense tropical moist broadleaf forests, crisscrossed by four rivers, including the Brahmaputra, Mora Diphlu, Diphluand Mora Dhansiri. The park includes numerous small bodies of water.
Kaziranga is home to a high density of tigers and was declared a Tiger Reservein 2006. The park is home to large breeding populations of elephants, wild water buffalo, and swamp deer.

Kaziranga is recognized as an Important Bird Area by BirdLife International for the conservation of avifaunal species.