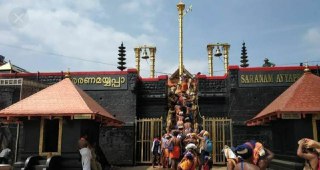 Supreme Court not to review Sabarimala case, to examine ‘larger issues- THE HINDU-14-01-2020

Bench not to go into legality of issues such as the practice of polygamy and ‘nikah-halala’ in Islam. A nine-judge Bench led by Chief Justice of India Sharad A. Bobde on Monday said its objective was not to review the Sabarimala women entry case but examine “larger issues” of law like the prohibition of women from entering mosques and temples to genital mutilation among Dawoodi Bohras and the banning of Parsi women who married inter-faith from entering the fire temple. On November 14, the five-judge Bench led by then Chief Justice Ranjan Gogoi, instead of deciding the Sabarimala review entrusted to it, sought an “authoritative pronouncement” on the Court's power to decide the essentiality of religious practices. Framing seven questions, the Bench referred them to a seven-judge Bench.

These referral questions included whether “essential religious practices” be afforded constitutional protection under Article 26 . Chief Justice Bobde, who succeeded Justice Gogoi, formed a Bench of nine rather than seven judges to examine these referred questions which concern multiple faiths.

The court posted the case for hearing after three weeks. The Bench would not go into the individual facts of the various petitions that make the body of the case before it. “We will decide questions of law on women's entry to mosques/temples, genital mutilation by Dawoodi Bohras, entry of Parsi women who marry outside their community into fire temple. We will not decide individual facts of each case,” Chief Justice Bobde addressed the lawyers in the courtroom.

“This Court cannot tell how religion is to be practised,” Mr. Dhavan submitted. They drew the Bench's attention to the Shrirur Mutt judgment of the Supreme Court of 1954. According to the 62-year-old verdict, the essentiality of religious practices should be decided in accordance with the religious doctrines of each faith. The Supreme Court has limited power of judicial review, they argued.

The 1954 judgment held that any regulation could only extend to religious practices and activities which were economic, commercial or political in their character. “The only reason to refer this to a nine-judge Bench seems to be that Shirur Mutt was decided by a seven-judge Bench. But no one has questioned that judgment,” Ms. Jaising said.