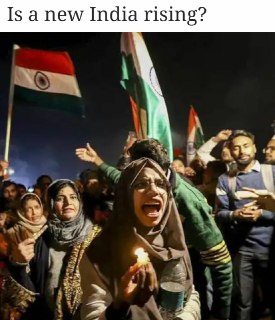 The tsunami of protests across the length and breadth of the country has several fascinating facets.

Barring issuing some statements in support or occasional visits by leaders to a protest site, even political parties have kept themselves at a distance from these protests.

The power of resistance:

A consequence of civil society’s direct involvement is that it is refusing to buy the current regime’s divisive Hindu-Muslim formula. Yet, all this could not crush the spirit of questioning, especially on campuses, repression notwithstanding. Jawaharlal Nehru University is an outstanding instance of standing up to repression for over four years now.

One of the most endearing aspects of the current wave of protests is the exemplary quality of leadership displayed by students from the underprivileged social strata. JNU Students’ Union president Aishe Ghosh has once again occupied premier space on this front, thanks again to the mishandling by the Modi regime. One also comes across a large number of such promising student leaders on local channels speaking in their local language. This is where one sees promise of a new generation refusing to buy any “line” of any party but laying down its own terms for the country’s future discourse.