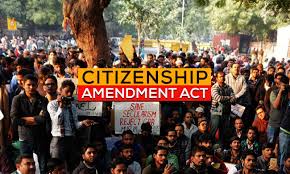 Protests against the Citizenship (Amendment) Act.

There are concerns that the Citizenship (Amendment) Act excludes Muslims from its beneficial provisions. Much harm has been caused by fears set off by the law leading to violence and the subsequent loss of life and property.

Rules to implement the CAA:

Government has indicated that it is open to suggestions on the rules to implement the CAA. However, there is a need to take that extra step to allay the concerns raised.

The government must heed the call for meaningful changes that would dispel fears gripping the country, especially minorities.

The stated objective is the fast-tracking of applications from minorities from three Muslim-majority neighbourhood countries for citizenship by naturalisation. This could be achieved without violating the Constitution or its secular ideals.

The first step would be to further amend the Act, to drop its religion-specific wording, and make it explicit that the benefit would be open to all undocumented migrants who can prove persecution in their home countries.

Removing the reference to illegal migrants:

A provision of the present CAA is to remove this illegal tag from non-Muslim minorities from Bangladesh, Afghanistan and Pakistan.

Dropping the reference to illegal migrants will automatically enable any refugee to apply for citizenship, subject to the residential requirement.

CAA as an enabling law:

The CAA is only an enabling law and does not oblige the government to grant citizenship to anyone.

Therefore, a general enabling provision to allow a relaxation of the minimum residency requirement will serve the purpose of considering citizenship to any persecuted people. This would be non-discriminatory, without obligation to grant citizenship.

Need for a Refugee law:

India should enact a refugee law wherein the right to live a life without fear or confinement can be protected.
Although there might be some fear that the refugees may seek permanent asylum, the UNHCR can work with them officially for their voluntary repatriation

Though the Constitution does grant the right to freedom of expression, it only entails peaceful protests and methods. Damage to public property must be refrained from.

India is fortunate to be bestowed with a functioning judiciary. Any concerns regarding the CAA must be addressed to the judiciary. The judiciary must be allowed to decide on the constitutional validity of the law.