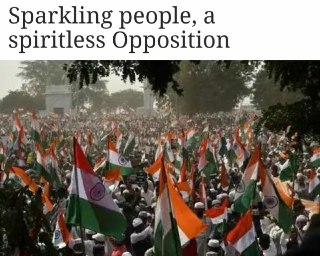 The most striking thing on the JMI wall is the national flag, hundreds of which are strung together in such a way that the tricolour runs parallel with the road. It is a beautiful, moving sight, offering scope for multiple interpretations. Though anyone from any religion could be left out of the NRC for lack of proper documentation, the fear is that unlike Hindus and other religionists who will be protected via the CAA, Muslims stand the risk of losing their citizenship. It is against this backdrop that JMI erupted in protest on December 15, 2019.

In an instant, the message communicated itself to other secular-spirited Indians. A lot more in numbers than previously believed, these were men and women who understood that there can be no India without Muslims. The young, assumed to be apolitical or coopted, emerged from their universities in swarms, proving that they carried in their blood India’s founding values of equality and inclusion. Indeed, the preamble seems to have become an anthem in itself as spaces in Delhi, Mumbai, Hyderabad, and other smaller towns have filled up to resounding recitals of its inspirational content.

Equally significant has been the emergence of women in leadership roles and from within conservative homes. Shaheen Bagh is a Muslim-majority neighbourhood and conventionally, women here have been home bound. Yet since the day of the Jamia crackdown, they have stayed put, day and night, in a make-shift pandal, waving the tricolour and energetically singing along patriotic songs. The flag can be seen imprinted on the cheeks of little children as also on the wrists of their mothers.

All these years, the Bharatiya Janata Party and its right-wing allies had used the flag as a weapon against Muslims and secular Indians. Between 2016 and 2017, scores of BJP volunteers took out tiranga yatras ostensibly to instil feelings of pride in the country but in actual fact to taunt Muslims and liberal Indians. The then Human Resource Development Minister, Smriti Irani, decreed that each of India’s Central Universities will fly the flag atop a 207-foot high mast. Four years later, the Narendra Modi government has been rendered speechless by the sight of thousands of flags flying in all corners of India.

The BJP used the flag as a threat, as an instrument of coercion, as a test of loyalty for alleged “anti-nationals”, and finally as a symbol of the Prime Minister’s New India.

Today, a different version of New India confronts the rulers, one that has turned the “anti-national” slur on its head. They are the patriots, not the pseudo-patriots populating the BJP. The Prime Minister continues to be immensely popular and electorally saleable. The anti-CAA-NRC protests have also consolidated his majoritarian base.

Of and by the people:

The Congress has expressed its opposition to the CAA-NRC architecture. The movement has been of and by the people with the participants apparently keen to keep it that way. It is a wariness born of apprehension that the presence of political parties will politicise the protests and dilute their impact, which in turn will give a handle to the rulers to condemn the phenomenon as a whole as agenda-driven. The Prime Minister knows this.

In his rallies he has been asking whether the Opposition would offer citizenship to all Muslims from the neighbourhood. The question is intended as a trap and deliberately avoids nuances. He has the right instincts but he has refrained from showing up at the protests because he has an election to fight next month. There has not been a more opportune time than now for India’s Opposition to prove that they are in the fight.

The ferment on the streets can remain citizen-driven.