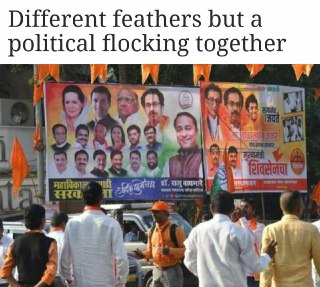 In Maharashtra, the three-party coalition government, of the Shiv Sena, the Congress and the Nationalist Congress Party , under the leadership of Sena leader Uddhav Thackeray, seems to have stabilised after a bumpy start. Though negotiations over Ministry composition and portfolio allocations were long-drawn, the issue has settled. All this has led to talk of an ideological realignment in Maharashtra politics. More significantly, commentators have spoken of a tempering of the Sena’s long-standing Hindutva positions.

The answer lies in how the BJP treated its allies and political opponents, at the Central level and in the State. A number of heavyweights from the Congress and the NCP joined the BJP. It would be foolish to say that this exodus was sparked by ideological considerations. The BJP too wooed those it thought would strengthen the party in areas where it was weak.

The BJP appears tired of its allies and, ideally, would like a state of affairs where it could win elections without them. It tried doing so in the 2017 municipal elections in Mumbai. The stresses and strains in the BJP-Sena alliance during the tenure of the last government emerged primarily because of these efforts of the BJP. The Congress’s central leadership had misgivings about an alliance with the Sena given its stand on Hindutva.

But the Sena played down these very positions. This naturally leads to the proposition that the coalition would last long since there are no ideological contradictions among them. This is indeed wishful thinking.

The hollowness of such analyses necessitates a look at the Sena’s ideological positions which till date would demonstrate what it stands for. Though it began its journey as a party primarily asserting a regional identity, and that too in the Mumbai-Thane belt, its positions always had strong elements of Hindutva in them. The party’s spread in the Marathwada region of Maharashtra in the late 1980s occurred primarily because of this positioning. It was this ideological complementarity that led the BJP to strike an alliance with it in the late 1980s and early 1990s which benefited both the parties.

One could argue that all this was in the past and much has changed. These two issues may now have been forgotten for the time being.

The first such event where stability would be tested would be the next major round of civic body elections, in 2022. Elections to urban bodies would certainly strain the coalition, whether or not the three arrive at a seat-sharing formula. This would more be so because in many places the partners would be fighting each other and not the BJP. Besides, the BJP, now in search of an ally, has been making overtures to the Maharashtra Navnirman Sena , headed by Raj Thackeray, the Chief Minister’s cousin.

There are enough indications that the alliance might be based on a common ideological positioning, namely Hindutva, with the MNS combining it with its regionalist politics. So the Sena would find itself competing for the same ideological constituency. It might then realise that the BJP, similar to what Sir Robert Peel did more than a century ago to the Whigs, has stolen its ideological clothes.