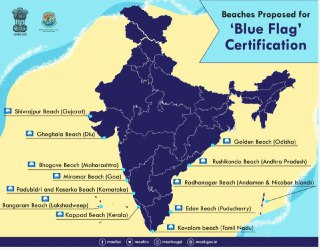 The Blue Flag Certification is a certification by the Copenhagen-based Foundation for Environmental Education (FEE). It is awarded to a beach, marina or sustainable boating tourism operator for meeting its stringent standards.

The Blue Flag is a trademark owned by FEE which is a not-for-profit, non-governmental organization consisting of 65 organizations in 60 member countries in Europe, Africa, Oceania, Asia, North America and South America. Only local authorities or private beach operators can apply for a Blue Flag for beaches. The Blue Flag is sought for beaches, marinas and sustainable boating tourism operators as an indication of their high environmental and quality standards.

Certificates, which are referred to as awards by FEE, are issued on an annual basis to beaches and marinas of FEE member countries.

13 Indian beaches have been shortlisted for the Blue flag certification.
In 2017, the Ministry of Environment, Forest, and Climate Change had started a pilot project under a Unified Coastal Areas Management Programme to develop the Indian beaches according to the Blue Flag.
The project aims to improve the aquatic habitat by cleaning the growing pollution and garbage in the Indian beaches, develop ecological tourism with constant progress and development of tourist facilities.
Chandrabhaga beach of Odisha’s Konark coast was the first to complete the tag certification process will be the first in Asia to get the Blue Flag certification.

Besides, 12 other beaches across are also being developed by the Society for Integrated Coastal Management (SICOM) as blue flag beaches which include two beaches in Maharashtra and one beach each from Puducherry, Goa, Daman and Diu, Lakshadweep and Andaman and the Nicobar Islands.
An integrated coastal management scheme referred to as Beach Management Service (BeaMS) has also been introduced by the ministry to reduce existing pollutants on beaches and achieve such high international standards.