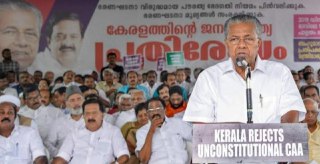 Kerala became the first State to join citizens across the country’s spectrum to challenge the constitutionality of the Citizenship (Amendment) Act (CAA) in the Supreme Court.

The Kerala government moved the Supreme Court against the Citizenship (Amendment) Act becoming the first state to challenge the law.

It filed a petition under Article 131 of the Constitution and asked for the law to be declared unconstitutional and in violation of Articles 14 (equality before law), 21 (protection of life and personal liberty) and 25 (freedom of conscience and free profession, practice, and propagation of religion).

What is Article 131 of the Constitution?

(a) between the Government of India and one or more States.

(b) between the Government of India and any State or States on one side and one or more other States on the other.

(c) between two or more States.

if and in so far as the dispute involves any question (whether of law or fact) on which the existence or extent of a legal right depends:

The said jurisdiction shall not extend to a dispute arising out of any treaty, agreement, covenant, engagement, sanad, or other similar instrument which, having been entered into or executed before the commencement of this Constitution.

However they continue in operation after such commencement, or which provides, that the said jurisdiction shall not extend to such a dispute.

What kinds of disputes are covered under Article 131?

In ‘State of Rajasthan vs Union of India’, 1977, the Supreme Court ruled that the existence or extent of a legal right is a precursor before a suit under Article 131 is entertained. But mere wrangles between governments have no place in the scheme of that Article.

Similarly, in the 1978 case, ‘State of Karnataka vs Union of India’, which involved the Centre’s authority to order an inquiry into a state Chief Minister’s conduct, jurisdiction under Article 131 was held valid.
In the present case filed by Kerala, central legislation (CAA) is being challenged. In 2011, a two-judge Supreme Court Bench in ‘Madhya Pradesh v Union of India’ had held such a suit was not maintainable.
Later in 2013, another two-judge Bench in ‘State of Jharkhand v State of Bihar and Another’ disagreed with the previous verdict and referred the matter to a larger Bench. Kerala’s plaint relies on the 2013 verdict.