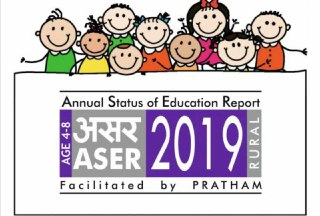 The draft NEP (National Education Policy) document points out that close to five crore children currently in elementary school do not have foundational literacy and numeracy skills.

NGO Pratham’s Annual Status of Education Report (ASER) in the past has spoken about deficiencies in India’s Education system and how children fall short on basic learning skills
In the latest edition of ASER, it directs attention to children between four and eight years of age, and suggests that India’s learning crisis could be linked to the weakness of the country’s pre-primary system.

The Right to Education and national policy mandates that children enter grade one at age six.

More than 20 per cent of students in Standard I are less than six, ASER 2019 reveals — they should ideally be in pre-school.

At the same time, 36 per cent students in Standard 1 are older than the RTE-mandated age of six.

According to the Annual Status of Education Report (ASER) 2019, 21% children in grade one of government schools could read words compared to 46.7% in private schools — an advantage of 122%. How is this possible?

It is well known that children who go to private schools come from relatively affluent backgrounds. They also tend to have more educated parents. This affords them certain advantages which are not available to children who are from less advantaged families and are more likely to attend government schools.

Early childhood education is supposed to prepare children for school. Children are supposed to be exposed to activities that build their cognitive abilities and early literacy and numeracy skills.

Therefore, children who enter grade one better prepared with these skills are likely to perform better.

For instance, among the cognitive tasks administered in ASER 2019 (seriation, pattern recognition and puzzle) only 23.8% children of grade one in government schools could do all three tasks compared to 43.1% in private.

According the report, within Standard I, children’s performance on cognitive, early language, early numeracy, and social and emotional learning tasks is strongly related to their age. Older children do better on all tasks.

Therefore ASER suggests children between four and eight should be taught cognitive skills through play-based activities. It emphasizes on developing problem-solving faculties and building memory of children, and not content knowledge

India has a huge investment in its early childhood programme, administered through 1.2 million anganwadis under the Integrated Child Development Services Scheme.

Pre-school education is part of their mandate. But at the best of times, these centres do no more than implement the government’s child nutrition schemes.

A number of health crises — including Acute Encephalitis Syndrome (AES) outbreak in Bihar — have bared the inadequacies of the system. A growing body of scholarly work has also shown that the anganwadi worker is poorly-paid, demoralised and lacks the autonomy to be an effective nurturer.

The findings of ASER 2019 make a clear case for strengthening these early childhood education centres so that they implement appropriate “school-readiness” activities.

There is a need to expand and upgrade anganwadis to ensure that children get adequate and correct educational inputs.

Understanding the challenges that children face when they are young is critical if we want to solve these problems early in children’s life.

Pedagogy: On the pedagogy side reworking of curriculum and activity is urgently needed for entire age band of four to eight.