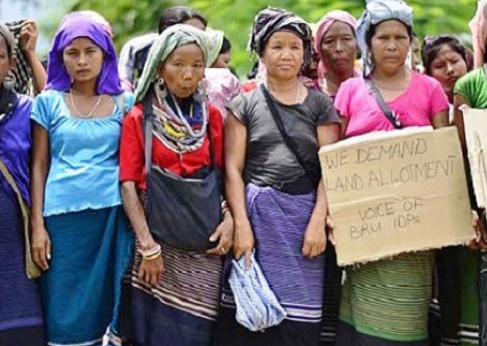 The signing of the quadripartite agreement in New Delhi to solve the Issue of the Brus.

The Brus and their displacement:

The Brus also referred to as the Reangs, are spread across Tripura, Mizoram and southern Assam.
Clashes in 1995 with the majority Mizos in Mizoram led to the demand for the removal of the Brus, from Mizoram’s electoral rolls. The arguments put forward was that the Brus were perceived to be non-indigenous in Mizoram.

There was an armed movement by a Bru outfit, which killed a Mizo forest official in October 1997. The retaliatory ethnic violence by the Mizos saw more than 40,000 Brus fleeing to adjoining Tripura where they took shelter in six relief camps.

The Centre and the two-State governments of Mizoram and Tripura made several attempts to resettle the Brus in Mizoram starting from November 2010. Protests by Mizo NGOs, primarily the Young Mizo Association, stalled the process.
The Brus began demanding relief on a par with the relief given to Kashmiri Pandits and Sri Lankan Tamil refugees.
The Centre spent close to Rs.500 crores for relief and rehabilitation.
A final rehabilitation package of Rs.435 crores was arrived at in July 2018. The package entailed one-time assistance of Rs.4 lakh as a fixed deposit within a month of repatriation, monthly cash assistance of Rs.5,000 through DBT, free rations for two years, and Rs.1.5 lakh in three instalments as house-building assistance.
The package also included Eklavya residential schools, permanent residential and ST certificates besides funds to the Mizoram government for improving security in Bru resettlement areas.
Most of the refugees stayed back, demanding resettlement in close-knit clusters and an autonomous council for Brus in Mizoram.

The Centre, State governments of Tripura and Mizoram, and representatives of Bru organisations signed the agreement in the presence of Union Home Minister.
The agreement allows some 35,000 Bru tribal people, who were displaced from Mizoram and are living in Tripura as refugees since 1997, to settle permanently in Tripura.

Notably, the demand to rehabilitate the Brus in Tripura was first raised by the scion of the Tripura royal family. The acceptance by the Tripura government is also a significant gesture.
The decision was taken from a humanitarian point of view of the Brus, who were apprehensive about returning back to Mizoram.

The solution being sought could set a bad precedent, encouraging ethnocentric states to eject minorities.
This goes against the rights of the Brus of Mizoram. They were illegally forced out of their homes during the ethnic violence and should ideally be re-settled back in Mizoram. The solution seems to legitimize the ejection of minority communities by ethnocentric states.

There is bound to be some domestic differences within Tripura. The conflicts between the Brus and the local Bengali non-tribal people have started taking place in Tripura.

The displaced Brus who returned to Mizoram have already begun demanding a package equivalent to the one those who stayed behind in the Tripura relief camps.

Salient features of the new agreement:

• Around 34,000 Bru refugees will be settled in Tripura and would be given aid from the Centre to help with their rehabilitation through a package of around Rs 600 crores.

• These people would get all the rights that normal residents of the States get and they would now be able to enjoy the benefits of social welfare schemes of Centre and State governments.

• Each of the displaced families would be given 40×30 sq.ft. residential plots, in addition to the aid under earlier agreement of a fixed deposit of Rs. 4 lakhs, Rs. 5,000 cash aid per month for 2 years, free ration for 2 years and Rs. 1.5 lakhs aid to build their house. The government of Tripura would provide the land under this agreement.

• In 1997, following ethnic tension, around 5,000 families comprising around 30,000 Bru-Reang tribals were forced to flee Mizoram and seek shelter in Tripura. These people were housed in temporary camps at Kanchanpur, in North Tripura.

• There had been a sustained demand of most Bru-Reang families that they may be allowed to settle down in Tripura, considering their apprehensions about their security.