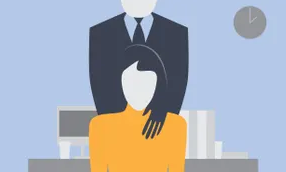 Recommendations to strengthen laws against sexual harassment at workplace.

The WCD Ministry had steered the Sexual Harassment of Women and Workplace (Prevention, Prohibition and Redressal) Act in 2013. This act is applicable to government offices, the private sector, NGOs and even the unorganized sector.
This act was largely based on the VISHAKA GUIDELINES laid down by the Supreme Court in 1997.
The act made the employer responsible to prevent or deter acts of sexual harassment at the workplace. The Internal Complaints Committee (ICC) would be constituted to enquire into complaints regarding sexual harassment at the workplace.
The Act required the employer to provide requisite assistance to a woman if she chooses to file a complaint under the IPC against the perpetrator, after the conclusion of the enquiry.

The 2013 Act had entrusted the powers of a civil court to the Internal Complaints Committee (ICC) without specifying if the members need to have a legal background. This was a major lacuna given that the ICC formed an important grievance redressal mechanism under the framework of the act.
The 2013 act only imposed a fine of Rs.50,000 on employers for non-compliance with respect to the constitution of the ICC. This proved to be insufficient in ensuring that the employers constituted the ICC in a time-bound manner.

As per National Crime Records Bureau (NCRB), the number of sexual harassment incidents at “work or office premises” registered under Section 509 IPC (words, gesture or act to insult the modesty of a woman) were 479 and 401 in the years 2017 and 2018 respectively.
The total number of sexual harassment incidents in 2018 including that in public places, shelter homes and others was 20,962. The number of cases continued to be high questioning the effectiveness of the 2013 act.

The Group of Ministers:

The Group of Ministers (GoM) was constituted in October 2018 in the aftermath of the #MeToo movement, which witnessed many women sharing their ordeal of sexual harassment on social media.
The GoM was constituted to strengthen the legal framework to prevent sexual harassment at the workplace.
The GoM was reconstituted in July 2019 under the Home Minister. The other members of the GoM include the Finance Minister, Human Resource Development Minister and Women and Child Development Minister.

The GoM has finalised its recommendations. It will be now put up for comments from the public.
Acknowledging the fact that the laws need to change with time, the sexual harassment of women at the workplace needs to be strengthened with suitable amendments.
The major recommendation includes the addition of new provisions to the Indian Penal Code (IPC) which would strengthen the existing laws on sexual harassment at the workplace.
The proposed amendments would be largely based on the Vishaka Guidelines laid down by the Supreme Court in 1997.
The amendments would form a part of the Ministry of Home Affairs (MHA) project to reboot the IPC. Several retired judges, legal luminaries and State governments are being consulted by the Bureau of Police Research and Development (BPR&D) as a consultative measure before the overhauling of the IPC.