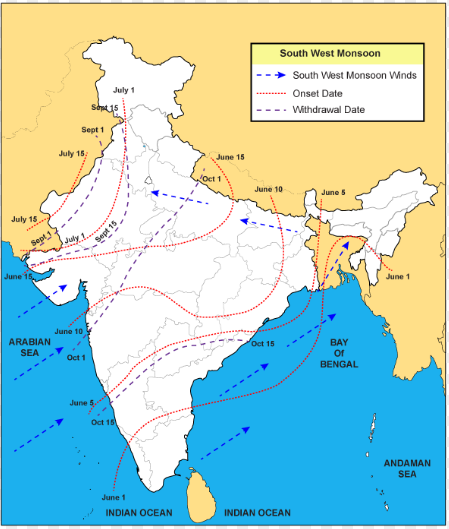 • India Meteorological Department (IMD) had decided to revise the normal onset and withdrawal dates for the monsoon in some parts of the country from this year.

• The four-month southwest monsoon season, which brings as much as 70 per cent of the country’s annual rainfall, officially begins on June 1, with the onset over Kerala, and ends on September 30.

• Although the June 1 date for the onset of the monsoon on the Kerala coast is unlikely to be changed, the dates for onset in many other parts of the country are expected to be revised.

• Effectively, the monsoon is now expected to have later arrival and withdrawal dates in most parts of the country.

• The main reason for the revision in the normal dates is the changes in precipitation patterns that have been taking place over the last many years.

• In the last 13 years, for example, only once has the onset over the Kerala coast happened on June 1.

• The revisions will help the IMD track the monsoon better, and improve its “impact-based” forecasts. New dates will likely nudge farmers in some parts of the country to make slight adjustments in the time of sowing their crops.