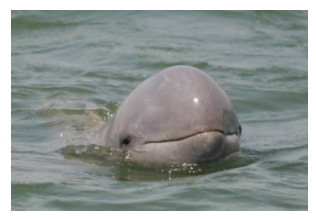 146 Irrawaddy dolphins were recently sighted in Chilika Lake of Odisha. The lake has highest single lagoon population of the aquatic mammal in the world.

The Irrawaddy dolphin is a euryhaline species of oceanic dolphin found in discontinuous sub-populations near sea coasts and in estuaries and rivers in parts of the Bay of Bengal and Southeast Asia.

They are also found in coastal areas in South and Southeast Asia, and in three rivers: the Ayeyarwady (Myanmar), the Mahakam (Indonesian Borneo) and the Mekong.

The total population of these aquatic mammals in the world is estimated to be less than 7,500.

Of these, more than 6,000 Irrawaddy dolphins have been reported from Bangladesh, while the dolphin distribution in Chilika is considered to be the highest single lagoon population.