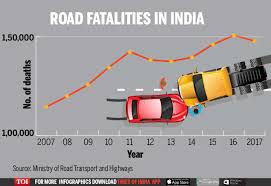 Road injury was the leading cause of death in India among 15 to 39-year-old men in 2017 and was the second leading cause for both sexes combined, according to the findings of the India State-Level Disease Burden Initiative published in the Lancet Public Health.

The study gives the first comprehensive population-level estimates of road injury deaths by type of road users in each State.

Motorcyclist and cyclist road injury death rates were 69% and 33% higher in India as compared to the global average.

The study noted that if the estimated trends of road injury deaths up to 2017 were to continue, none of the States are likely to meet the SDG 2020 target of reducing such deaths by half from 2015 to 2020 or even by 2030.