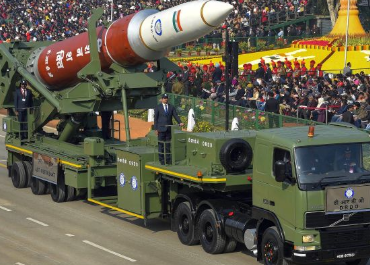 India on Sunday showcased its Anti-Satellite missile capability to the world as the ASAT weapon, Mission Shakthi, developed by the Defence Research and Development Organisation rolled out on the Rajpath during the 71st Republic Day parade. In addition, the IAF’s newest inductions, Chinook heavy lift helicopters and Apache attack helicopters, also made their debut during the flypast.

The flypast consisted of 41 aircraft of the IAF and four helicopters of the Army Aviation. These include 16 fighters, 10 transport aircraft and 19 helicopters flying between 60-300 metres above ground level.

The DRDO shot down a live satellite in Low Earth Orbit of 300 km using a modified interceptor of the Ballistic Missile Defence system in ‘hit to kill’ mode with 10-cm accuracy. “The covert technology of ‘hit to kill’ developed for the first time in India for such applications enables it to destroy an enemy satellite by directly colliding with it with pin-point accuracy,” a brochure issued by the Defence Ministry at the parade said.

Republic Day celebrated with pomp and gaiety in Chennai

The Army showcased its recent induction, the 155-mm Dhanush towed howitzer and K9-Vajra self-propelled artillery gun. The Army is likely to constitute its first Dhanush regiment in March. This is also the first Republic Day parade with a fourth four-star officer in attendance following the creation of the Chief of Defence Staff . Symbolising this was a tri-service helicopter formation of three Advanced Light Helicopters from the three Services.