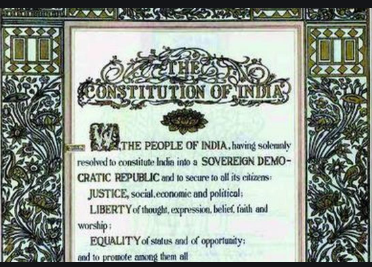 The Preamble to the Constitution, little invoked till the Kesavananda Bharati v/s State of KERLA(1973) gave a new lease of life by this landmark judgement. The emphasis is on the Preamble’s character as the Constitution’s very soul. While there seems to be no doubt across the protest spaces that the Constitution is the ‘authoritative horizon’ of India’s public life, the Preamble is held aloft as our lens to it.

But it is important here to also draw attention to the fact that small parties such as Prakash Ambedkar’s Vanchit Bahujan Aghadi and Asaduddin Owaisi’s All India Majlis-e-ittehadul Muslimeen, and even Adivasi autonomy assertions, often around the slogans of ‘jal, jameen, jangal’ , have been mobilising for years their respective social constituencies in defence of the Constitution. Besides, a crop of young, bright constitutional scholars are pushing the boundaries of the document’s interpretation to encompass and reach out to the complexities of Indian polity little explored before.

Reclaiming the idea of India

As a specific idea of the nation brags triumphalism, the republican turn to the constitutional imagery, expressed in vibrant citizen activism and initiative, seems to be reorienting the idea of nation in a different direction. There is a close relation between India’s distinctive struggle for national independence against colonial rule that brought the large masses to the fore in a non-violent movement and the way India went about constituting itself as a sovereign, democratic republic. In the Constituent Assembly debates, we find that several voices wished to reduce the latter to the former while many others prevaricated. When Ambedkar moved the draft Constitution in the Assembly on November 4, 1948, it turned out to be “we the people” who had resolved to constitute India into a “sovereign, democratic, republic”, and the Constituent Assembly became only its representative.

There was also the additional clause on “fraternity” that upheld “dignity of the individual” and “integrity of the nation”. Many of the immediate concerns of welding the nation together that crowded Nehru’s draft resolution were either shed or packed off to other parts of the Constitution. This shift did not go unnoticed and several speakers charged Ambedkar of hijacking the resolution and repacking it with fundamentals of his choice. Nehru did not intervene in defence of his characterisation of India.

The making of a republic

The usage of the idea of ‘republic’ in the nationalist discourse of India was relatively feeble and even Nehru, when he used the term in his speech, seemed uncomfortable with it, contrasting it merely with monarchical regimes. One of his defences for not bringing in ‘democracy’ upfront to characterise India’s constitutional regime was that the word ‘republic’ already contained it. A few speakers in the House later pointed out that a republic need not necessarily be a democracy. As a disciple of the Jotirao Phule school of thought, Ambedkar was the inheritor of an idea of republicanism with stress on the citizen, citizen agency and public spiritedness arising therefrom, and citizens bonding themselves into a community of equals, and enabling it in turn.

Phule had argued, and Ambedkar was in agreement with it, that the spirit of republicanism vanished from India with the rise of monarchy and its entwinement with Brahminism, and resurrected itself in the West.

Ambedkar remained deeply suspicious that an ‘independent’ India would be able to move much further as a political community of free and equal citizens reproducing itself overtime. However, at the same time, if India was to move in that direction, constitutional democracy was a sine qua non. His final speech in the Constituent Assembly on November 25, 1949 argued that if constitutional democracy did not make way for social and economic democracy, there was little hope of political democracy surviving in India. There was no doubt that by substituting the idea of ‘independent, sovereign, republic’, with ‘sovereign, democratic, republic’, Ambedkar was trying to redirect India into a very different trajectory.

However, as the decades passed, the vision behind such an idea of India became ever more elusive.