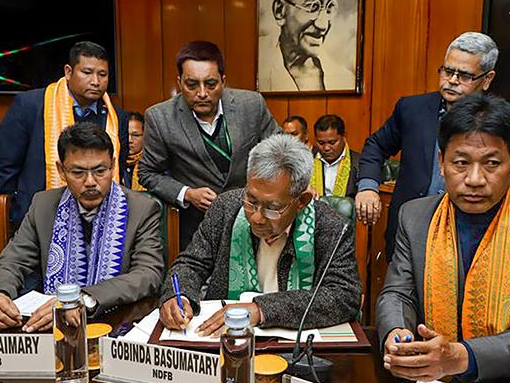 Govt. of India has signed a tripartite agreement with the representatives of the banned National Democratic Front of Bodoland (NDFB) organisation at the Ministry of Home Affairs (MHA). The pact was signed to boost peace in the Northeastern state of Assam. The agreement would fulfill political and economic demands besides safeguarding the language and culture of the Bodo community people.

• As a result, ethnicity-based imbalances in a plural but fragmented society has led to assertion of sub- regional identities hinging on issues like control over land, exploitation of resources from outsiders,
unemployment and lack of development etc.

• Bodoland represents one such ethnicity-based regionalistic undercurrent in Assam society.

• Bodos are plain-dwelling tribes, with a distinct ethnicity and language’, inhabiting the Bramhaputra
valley in western Assam.

• In 1962 Assamese was declared the official language of Assam and was made medium of instruction in
the universities. Fearing the dominance of Assamese speaking populace, Bodos have been asserting
their identity for a separate state Bodoland since 1970s.

• The demand was to create Bodoland carving out Kokrajhar, Dhubri, Bongaigaon, Barpeta, Nalbari,
Kamrup, Darang and Sonitpur districts of Assam.

Redrawing of the BTAD:

As per the agreement, villages dominated by Bodos that are presently outside the BTAD would be included and those with non-Bodo population would be excluded. Hence it will involve a redrawing of the boundaries.

The memorandum of settlement states that the criminal cases registered against members of the NDFB factions for “non-heinous” crimes shall be withdrawn by the Assam government and in cases of heinous crimes it will be reviewed.
The families of those killed during the Bodo movement would get Rs.5 lakh each.

A Special Development Package of Rs.1500 crore would be given by the Centre to undertake specific projects for the development of Bodo areas.

Bodos living in the hills would be granted Scheduled Hill Tribe status. This would help them receive the state’s aid.