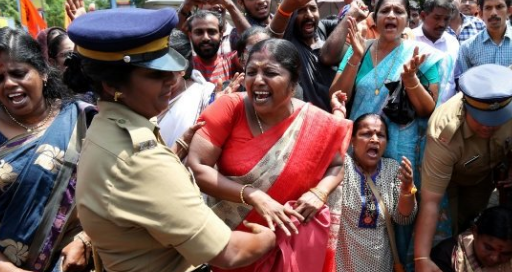 • In its review petition with reference to its 2018 Sabarimala verdict, SC had concluded that its 2018 judgment lifting age restrictions on the entry of women into the Sabarimala hill shrine may impinge on the affairs of other religions too and will require a more detailed examination.

• The Supreme Court had decided that petitions seeking review of the verdict will be kept pending till a larger bench takes a call on the larger issues of law arising from similar practices.

• The 9 bench judge is expected to address the issue of the scope of judicial review in situations when religious faith and women’s equality were at odds.

• The Solicitor-General has informed the Supreme Court that there was no consensus yet among the petitioning lawyers, on framing questions for the nine-judge Bench to examine.

• The Solicitor-General has suggested that the court frame the larger issues involved.

• The Bench had clarified that it would not be restricted to the Sabarimala women entry case but would examine larger issues of law arising from practices such as the prohibition of women from entering mosques and temples, female genital mutilation among Dawoodi Bohras and the ban on Parsi women who married inter-faith from entering the fire temple, concerning multiple faiths.

Issues with this Judgment

• It is shocking that the Bench includes the abhorrent practice of female genital mutilation in the right to practice of religion.

• It is well-established that freedom of religion, under Article 25, is subject to public order, morality and health, and it may not be difficult for any court to test the validity of the practice against the restriction on grounds of a woman’s health, and this may not require an exalted panel of seven judges.
In keeping the petitions on Sabarimala pending further, the court has displayed a disquieting inability to stand by its previous transformative judgment.

• Further, it may lead to a repeat of the unsavoury incidents when religious groups and political activists blocked and attacked women devotees.