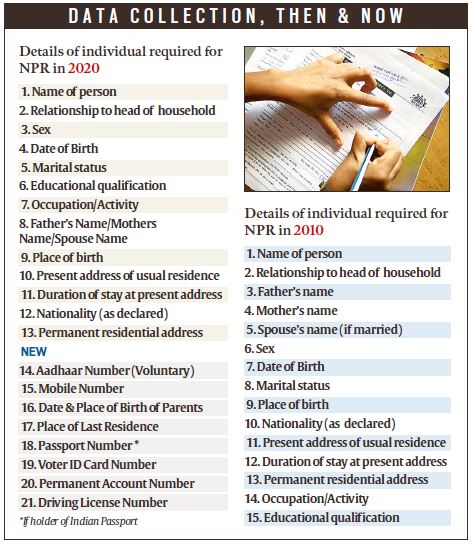 The link between NPR and NRC:

The Citizenship (Registration of Citizens and Issue of National Identity Card) Rules, 2003, introduced the term â€˜Population Registerâ€™ and said that particulars collected in the population register shall be verified and scrutinised for the purpose of preparation and inclusion in the citizenship register.
The Rules inserted in 2003 to the Citizenship Act, 1955 says that NRC will be prepared at the local, district, state and national level after verifying the details in the NPR and establishing the citizenship of each individual.

According to the Rules, a personâ€™s citizenship status will be decided by local officials â€” whether or not the person will figure in the NRIC. No new law or rules are needed to conduct this exercise across the country.

Should NPR be followed up by NRC?

The Centre is also mandated by the rules to carry out a house-to-house enumeration and collection of particulars related to every individual and family, including citizenship status.
Documents and biometrics collection during NPR:

In the initial phase, details may be accepted based on self-declaration.
If a citizenship register is to be generated, scrutiny of documentary proof may become necessary. Biometrics were collected during the last NPR for some, and biometrics collected for Aadhaar were used for others.

As Aadhaar coverage saturation is close to 98%, it is possible to dispense with the collection of biometrics during NPR for most residents.

NPR is being updated for efficient delivery of welfare and social benefits under government schemes.
This was the original objective of NPR, but with Aadhaar being introduced and backed by an Act, which mandates linking of subsidies and welfare schemes to possessing an Aadhaar number, it may not be correct to argue that NPR is needed for efficient delivery of benefits any more.