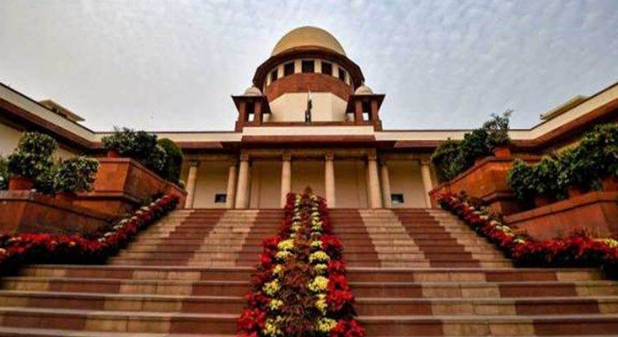 • Anticipatory Bail has been defined under Section 438 of Code of Criminal Procedure – W any person has reason to believe that he may be arrested on an accusation of having com a non- bailable offence, he may apply to the High Court or the Court of Session for a direct under this section; and that Court may, if it thinks fit, direct that in the event of such arrest shall be released on bail.

• Question Referred to the Constitution Bench

1. Whether the protection granted to a person under Section 438 should be limited to a fixed period till the accused surrenders in court?

2. Whether the life of anticipatory bail should end when the accused is summoned by the court?

• Five Judge Constitution Bench ruled that the protection of anticipatory or pre- arrest bail cannot be limited to any time frame or “fixed period” as denial of bail amounts to deprivation of the fundamental right to personal liberty in a free and democratic country. But if there are any special or peculiar features
necessitating the court to limit the tenure of anticipatory bail, it is open for it to do so.

• The Court further held that life or duration of an anticipatory bail order does not normally end at the time and stage when the accused is summoned by the court, or when charges are framed, but can continue till the end of the trial. However, if there are any special or peculiar features necessitating the court to limit the tenure of anticipatory bail, it is open for it to do so.

• It was also acknowledged by Justice Arun Mishra that anticipatory bail acts as a protection because it prevents influential powers from implicating their rivals in false cases. Anticipatory bail also helps shielding members of opposition in cases of political rivalry.

• On importance of Anticipatory Bail – According to Justice Bhat, the freedom movement has shown how the likelihood of arbitrary arrest and indefinite detention and the lack of safeguards played an important role in rallying the people to demand independence.

• Consistent with the judgment in Shri Gurbaksh Singh Sibbia and others v. State of Punjab, when a person complains of apprehension of arrest and approaches for order, the application should be based on concrete facts (and not vague or general allegations) relatable to one or other specific offence.

• The application seeking anticipatory bail should contain bare essential facts relating to the offence, and why the applicant reasonably apprehends arrest, as well as his side of the story. These are essential for the court which should consider his application, to evaluate the threat or apprehension, its gravity or
seriousness and the appropriateness of any condition that may have to be imposed.

• It is not essential that an application should be moved only after an FIR is filed and can be moved earlier, so long as the facts are clear and there is reasonable basis for apprehending arrest.

• The Court issuing anticipatory bail depending on the seriousness of the threat of arrest should issue notice to the Public Prosecutor and obtain facts, even while granting limited interim anticipatory bail.

• While considering an application (for grant of anticipatory bail) the court has to consider the nature of the offence, the role of the person, the likelihood of his influencing the course of investigation, or tampering with evidence (including intimidating witnesses), likelihood of fleeing justice (such as leaving the country), etc. And if the Court deems necessary, can spell out necessary conditions while ordering such anticipatory bail.

• Anticipatory bail granted can continue after filing of the charge sheet till end of trial depending on the conduct and behavior of the accused.

• An order of anticipatory bail does not in any manner limit or restrict the rights or duties of the police or investigating agency, to investigate into the charges against the person who seeks and is granted pre-arrest bail.

• Nothing in Section 438 Cr. PC, compels or obliges courts to impose conditions limiting relief in terms of time, or upon filing of FIR, or recording of statement of any witness, by the police, during investigation or inquiry.

• The observations in Siddharam Satlingappa Mhetre v. State of Maharashtra & Ors (and other similar judgments) that no restrictive conditions at all can be imposed, while granting anticipatory bail are hereby overruled.

• Accordingly, it overruled the judgment in Salauddin Abdulsamad Shaikh v. State of Maharashtra 1996 (1) SCC 667 which restricted the scope of Section 438 of the Cr.PC. It also overruled Siddharam Satlingappa Mhetre v. State of Maharashtra & Ors. 2011 (1) SCC 694, to the extent it held that no conditions can be imposed while granting an order of anticipatory bail, is incorrect.