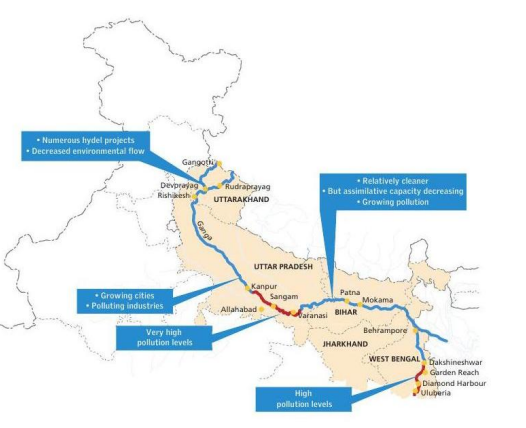 4 of the 11 hydropower projects along the upper reaches of Ganga are violating the e-flow norms prescribed by CWC
.
Background: E-Flow specifications for Ganga

• The E-flow for the river is notified in order to restore and maintain continuous uninterrupted flow of river Ganga (‘Aviralta’).

• Accordingly any dam or structure meant for diversion of river flows for the purpose of irrigation, hydro-power and domestic or industrial use will now have to maintain the minimum flow under the notification.

• There are 784 dams, 66 barrages, 92 weirs and 45 functional lift schemes located, at present, in the Ganga river basin.

• Central Water Commission is the designated authority to collect and monitor the flow data.

• The CWC further submits monitoring-cum-compliance reports on a quarterly basis to the NMCG.

• Hydropower projects located along the river are required to comply with the norms within 3 years, to ensure that a minimum amount of water flowed during all seasons.

• However the norms do not apply to mini and micro projects. National Mission for Clean Ganga has laid down the flow specifications.

From its origins to Haridwar

• Minimum flow should be

• 20% of the monthly average flow of the preceding 10-days between November and March.

• 25% of the average during the ‘lean season’ of October, April and May;

• 30% of monthly average during the monsoon months of June-September.

From Haridwar in Uttarakhand to Unnao, Uttar Pradesh

• Barrages at Bijnor, Narora and Kanpur
24 cumecs in October-May,
48 cumecs during June-September.

What is E-flow?
• The E-Flows are a pattern of flows that are required by a river to maintain itself in a desired environmental condition.

• Ecological services offered by the rivers in India are getting adversely affected by changes in quantity, quality and flow regimes.

• This is particularly true with Ganga.

• During its 2,525 km journey from Gangotri to Ganga Sagar, there are complex, nested sets of challenges that threaten the existence of the river.

• In the upper Himalayan reaches, the flow in the river is vulnerable to water abstractions by hydropower projects.

• From the time the river enters the plains, abstractions for agriculture, urban and industrial uses leave the river lean and polluted.

• As the river makes its way to the sea, and more pollution is added to the lean flows, the stress on the Ganga increases.

• E-Flows are recognised as a key to the maintenance of ecological integrity of the rivers, their associated ecosystems, and the goods and services provided by them.

• Fresh water that flows into the ocean nourishes estuaries, which provide abundant food supplies, buffer infrastructure against storms and tidal surges, and dilute and evacuate pollutants.

• The Environmental Flows describe the quantity, timing, and quality of water flows required to sustain freshwater and estuarine ecosystems and the human livelihoods and well-being that depend on these ecosystems.

• The 2018 Declaration presents an urgent call for action to protect and restore environmental flows and aquatic ecosystems for their biodiversity, intrinsic values, and ecosystem services, as a central element of integrated water resources management.

• Ganga most complex river basins in the world, in terms of the number of people residing in its basin space and the pressure on its water resources. The 2,525 km long river sustains multiple functions including ecological, socio-cultural and livelihoods. Population density is 520 person/km2 as compared to national average of 312 person/km.

• The Ganga is facing large-scale human interventions since 1850s, when major irrigation systems called the Upper Ganga Canal (UGC), whereas the Lower Ganga Canal (LGC) were constructed in 1870s leading to diversion of Ganga water resources for irrigation and other purposes.

• While large scale irrigation systems on Ganga has contributed immensely to the betterment of agricultural economy of the region, during the last half a century, many new challenges have compounded the pressures and stresses onto the Ganga, its water resources and its aquatic life. These challenges mainly include—(i) ever-growing towns into cities and cities into mega-cities on the banks of Ganga, (ii) industrialization along the settlements on the banks of Ganga, (iii) excessive groundwater exploitation and chemical inputs in agriculture, and (iv) changes in cropping pattern, including water intensive crops, which are leading to enhanced surface and ground water withdrawals.

• Thus the debate around improving the health of the Ganga River is mainly on two fronts, i.e., its water quality and quantity.

• Multi-dimensional, ranging from the issues of flows in the river to water pollution, climate change adaptation and habitat and biodiversity conservation.

• “The temporal and spatial variations in quantity and quality of water required for freshwater and estuarine systems to perform their natural ecological functions (including material transport) and support the spiritual, cultural and livelihood activities that depend on them.