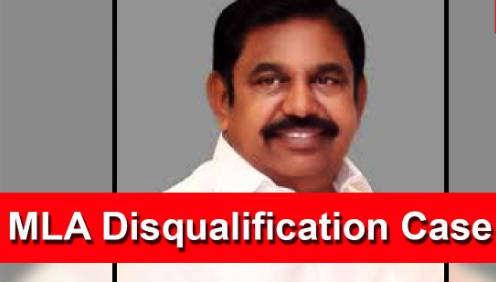 The Supreme Court has questioned the Tamil Nadu Speaker’s inaction with respect to the disqualification petitions filed under the Tenth Schedule (anti-defection law) against Deputy Chief Minister O. Panneerselvam and 10 other AIADMK MLAs for voting against the confidence motion moved by Chief Minister Edappadi Palaniswami in February 2017.

Tenth Schedule petitions were filed against Mr. Panneerselvam and the 10 other MLAs, for defying the party whip on March 20, 2017.
However, before the Speaker could proceed, the ECI recognised Mr. Panneerselvam’s faction as a “separate group”.

Subsequently, the Panneerselvam and the Palaniswami (OPS-EPS) factions merged.
In November 2017, the ECI declared the duo as the leaders of the AIADMK.
Meanwhile, the DMK approached the High Court for the disqualification of the 11 MLAs. The writ petitions were dismissed, following which the DMK moved the Supreme Court in May 2018.

A 2007 judgment by a Constitution Bench in Rajender Singh Rana case had laid down that the “failure of the Speaker to exercise his jurisdiction will attract judicial review”.
The Rana judgment has been highlighted and reiterated in the January 2020 verdict authored by Justice Nariman as the head of a three-judge Bench.