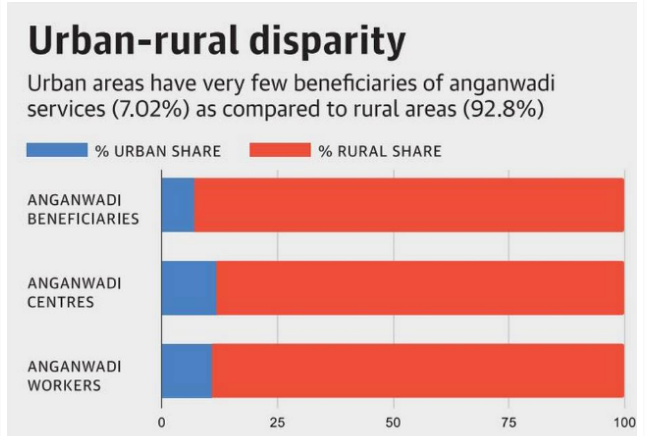 According to the government’s response to a Right to Information (RTI) query, for every 100 anganwadi beneficiaries in the country, only seven are in urban areas.
The disparity is primarily because of a severe lack of anganwadis in cities, leading to poor coverage of the government’s flagship programme in early childhood development.

The aim of the scheme is to reduce infant mortality and child malnutrition.

Beneficiaries include children in the age group of six months to six years, and pregnant women and lactating mothers.

While there were a total 7.95 crore beneficiaries of the anganwadi scheme in the country as on September 30, 2019, only 55 lakh were registered at urban anganwadis.

This is primarily because of an acute paucity of anganwadi centres in urban areas.

There are as many as 13.79 lakh anganwadis operational across the country, out of which 9.31 lakh centres are linked to the government’s web-enabled data entry system called Rapid Reporting System. Of those anganwadis that can be monitored online, 1.09 lakh centres are in urban areas and the remaining 8.22 lakh were in rural areas of the country.

As per Census 2011, 32% of India’s 1.2 billion population live in cities, though experts have said that if the definition of an urban settlement was broadened, the share of urban population will be much higher.

At the same time, 2% of under four-year-olds, 8% of children in the 5-9 years age group, and 6% of adolescents, were overweight. Data also showed that children in urban areas showed two to three times higher prevalence of obesity as compared to their peers in rural areas.

With these facts before it, the NITI Aayog has prepared a draft working paper to strengthen the ICDS programme in urban areas, keeping in mind challenges such as migration, population density and the long commute involved for workers and beneficiaries.