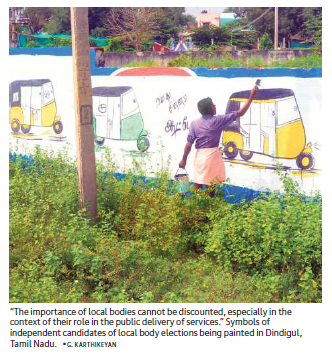 Tamil Nadu Governmentâ€™s decision to delay the holding of rural local body elections, due in 2016, by three years.

The unconstitutional delay in holding local body elections started when the Madras High Court cancelled the notification put forward by the State government citing irregularities in it. The reasons cited for subsequent postponements revolved around delimitation and carving out new districts.

After resorting to the infamous ordinance route to extend the tenure of the Special Officers of local bodies and some back and forth on the means of electing mayors and municipal chairmen, the State will now see elections being held for rural local bodies alone in two phases on December 27 and 30.

The elections to urban local bodies are expected to be notified soon, which in itself raises questions on the constitutional and moral validity of the time gap between rural and urban local body elections.
Concerns:

Unconstitutional and immoral methods are being employed to delay the local body elections.
There are serious implications of the delay in the conduct of elections given the significance of local bodies in the domains of efficacy, inclusiveness, participation and strengthening of political party structures.

Scholars argue that decentralisation and peopleâ€™s participation increased in the State of Tamil Nadu since the 1970s, thanks to the socio-political movements in the State.

The presence of robust machinery at the local level is a measure of the health of democracy and peopleâ€™s participation. Its absence is bound to have an immense effect.

Criticisms of bureaucratic hassles and delays apart, the importance of local bodies cannot be discounted, especially in the context of their role in the public delivery of services such as the Public Distribution System, pension schemes, and mitigation of disease outbreaks and disasters.

In February 2016, a few months before the notification for local body elections was put forward, the Tamil Nadu Legislative Assembly unanimously passed the much-needed bill that accorded 50% reservation to women in the local bodies, raising the quota from 33%. This has increased the scope for higher inclusiveness for women.

Reservations are in place for the depressed castes. A delay, therefore, has social justice ramifications too, a principle central to the socio-political history of Tamil Nadu.

Local body elections serve as a means to both strengthening the political partiesâ€™ organisational structures and in enabling them to stay closely connected with the voters.
Local bodies provide opportunities for the emergence of leaders at the local level outside of political parties as well.

Participation of people in political organisations:

The numerous opportunities in terms of official posts that open up through local body elections serve as an opportunity for political parties to give a chance to party workers from multiple backgrounds to partake in government functioning.

Eminent scholars of political science argue that such broad-based accommodation results in â€˜organisational pluralismâ€™, wherein, with intra-party pluralism, a given partyâ€™s engagement with society changes its orientation towards an atmosphere of tolerance.

In a diverse society like Tamil Nadu, one can argue that the presence of local bodies serves as a means to usher in societal syncretism through broad-based representation.

Taking stock of the multifarious benefits stemming out of the existence and functioning of local bodies to all the stakeholders involved, the need for sterner fixing of accountability and instituting checks in the system to avoid any delays in the future is of utmost importance.