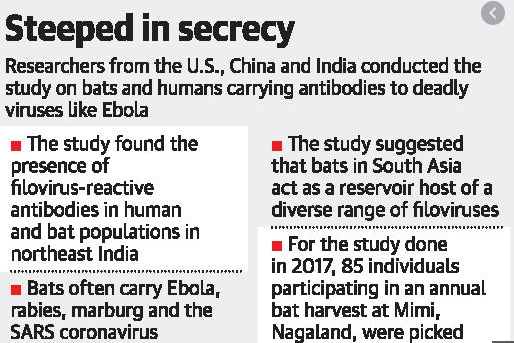 The government had ordered an inquiry into a study conducted in Nagaland by researchers from the U.S., China and India on bats and humans carrying antibodies to deadly viruses like Ebola.

The study came under the scanner as two of the 12 researchers belonged to the Wuhan Institute of Virology’s Department of Emerging Infectious Diseases, and it was funded by the United States Department of Defense’s Defense Threat Reduction Agency (DTRA). They would have required special permissions as foreign entities.

Investigations were ordered as to how the scientists were allowed to access live samples of bats and bat hunters (humans) without due permissions.

Under the scanner after the government ordered an inquiry into a study conducted in Nagaland by researchers from the U.S., China and India on bats and humans carrying antibodies to deadly viruses like Ebola, the National Centre for Biological Sciences (NCBS) said researchers based at the NCBS collected samples of serum from bats and humans. These samples were tested at the NCBS with the technologies supplied by the Duke-National University of Singapore Medical School (Duke-NUS).

The NCBS said its researchers have been studying bat antibodies in Nagaland since 2012.
In 2017, the NCBS and Duke-NUS started a collaboration, in which researchers based at the NCBS collected samples of serum from bats and humans.

The NCBS said researchers from the Wuhan Institute of Virology were not directly involved in the study. They were listed co-authors only because they supplied reagents, which is standard practice for scientific authorship.

The published study, however, notes researchers from the Wuhan Institute of Virology contributed in writing review and editing.

The NCBS statement further said it is not a direct recipient of research funds from the DTRA, which funded the study, and no biological samples or infectious agents were transferred into or out of India.

What does the study suggest?

The Nagaland study suggests bats in South Asia act as a reservoir host of a diverse range of filoviruses, and filovirus spillover occurs through human exposure to these bats.

Given the widespread challenges from the newly discovered viruses, officials say they want to take no chance on their spread and will take action to ensure all medical studies in the country adhere to strict norms.

Bats often carry ebola, rabies, Marburg and the SARS coronavirus. Many high-profile epidemics have been traced to bats, and scientists are discovering new bat-borne viruses all the time. Ebola and Marburg viruses are known to cause severe hemorrhagic fevers, which affect many organs and damage the blood vessels, killing more than 50 percent of the people they infect, according to the World Health Organization.