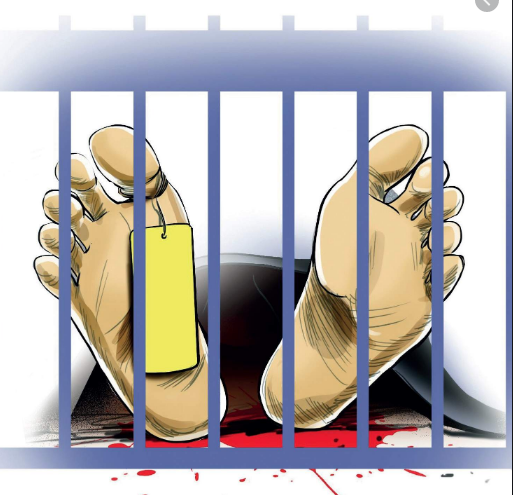 “No one can truly know a nation until one has been inside the jail. A nation should not be judged by how it treats its highest citizen but its lowest ones” – Nelson Mandela

Custodial death is the demise of an individual when he is detained or when he is under the custody of the Police Authorities.

Pradeep Tomar, a resident of Uttar Pradesh, was called to the police station for questioning in connection with a murder case. He died hours later after the policemen allegedly assaulted him.
He was accompanied by his son to the police station who claimed that Tomar was repeatedly kicked, punched, hit with planks of wood, given electric shocks and pierced with a screwdriver.

As per the Seventh Schedule, ‘Police’ and ‘Public Order’ are State subjects under the Constitution.
So the primary responsibility of prevention, detection, registration, investigation and prosecution of crimes, lies with the State Governments.
Most of the states in India have separate legislations dealing with the control of the police in that state.
Stats

According to the National Crime Records Bureau, custodial deaths have been on the increase in recent years. They increased by 9% from 92 in 2016 to 100 in 2017.

Custodial deaths are amongst the worst crimes in any civilized society. It is a flagrant violation of human dignity. It strikes at the very roots of the rule of law.

These incidents have brought into sharp focus the way Indian policemen torture and interrogate suspects in their custody leading to death.

The policemen responsible for custodial deaths rarely get punished, they feel emboldened to continue using torture as the tool to get to the truth.

Why the issue persists?

The police play a major part within the organization of criminal equity. One of the reasons for custodial passing is that the police feel that they have the control to control prove as the examination is their privilege and with such controlled prove, they feel they can bury the truth.

Lack of responsibility reflects the disappointment of the Government to keep a check on police forces. Close nexus between political aces and police helps them escape trial. There could be a colossal basic awkwardness of control between the police and those who are tormented.

The social and financially powerless status of most of the victims influences the chances of justice. In most cases indeed where there's prove of custodial passings, FIRs are not registered.

Even in case the FIR is recorded and examination takes put, since these enquiries are carried out by police officers after the custodial passings, the comes about for the most part favor the police.

The Preeminent Court in Prakash Singh v. Union of India had issued an arrange in 2006 on Police Reforms.

It said that each State Government ought to set up an autonomous Police Complaints Specialists at the State and locale levels to see into open complaints against police officers in cases of genuine wrongdoing, counting custodial passing, egregious harmed or assault in police custody.

However, as it were a number of states such as Kerala, Jharkhand, Haryana, Punjab and Maharashtra have actualized the arrange. Others have not taken the matter genuinely.

Legal Enquiry needs to be conducted and in the event that charges of infringement are demonstrated, maximum punishment as endorsed by law needs to be imposed on the Police Officers.

Scientific devices beside legitimate genuine cross examination procedures got to be utilized to decrease custodial passings instead of utilizing hones of third-degree and torture.

The government must re-educate the police, sensitize them and instill values of regard for the human being. Finally, to guarantee that custodial passings are dodged, CCTV cameras must be introduced interior the lock-ups, which ought to be checked by the senior police authorities.