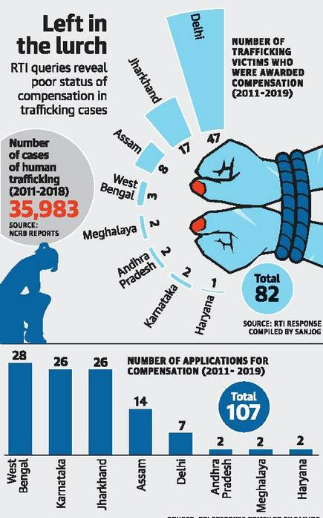 The report titled “UNCOMPENSATE VICTIMS”, released by Sanjog, a technical resource organization that works to combat trafficking and gender-based violence.

The Section 357-A of Code of Criminal Procedure has provisions to compensate victims who suffered because of a crime.

In 2012, the government announced Rs.1,000 crore Nirbhaya fund to be used to combat sexual violence against persons including children or adults. Part of the Nirbhaya fund is being used in the Victim Compensation Scheme. It is a national scheme to compensate survivors of rape, acid burns, and trafficking among other forms of violence.

However, the response obtained through RTI queries from 25 States and seven Union Territories reveals that between March 2011 and April 2019, only 82 human trafficking victims were awarded compensation.
This means, only 0.2% of all survivors of human trafficking received the compensation announced by the government in the last eight years.

The revelation highlights the poor status of compensation awarded to survivors of human trafficking in India. Also notably, among the 82 survivors who were awarded compensation, only 77 received the relief amount.

Despite the Supreme Court directing NALSA (National Legal Services Authority) to frame a standardized victim compensation scheme, the amount of compensation to victims of trafficking varies from state to state.

The low number of trafficking survivors who have applied for the victim compensation scheme suggests that there remains a lack of awareness on the part of the victims.

This might be primarily due to lack of initiative on the part of legal services authority or low investment on part of legal aid that results in very few survivors having access to compensation.

The current framework to deal with the issue of human trafficking is also a challenge given that from the stage of rescue till rehabilitation, the survivors are in touch with multiple agencies and have to fulfill various procedures and formalities.

The District and State Legal services authorities’ response to the compensation claims has been slow, and often place the burden of proof on the survivors.