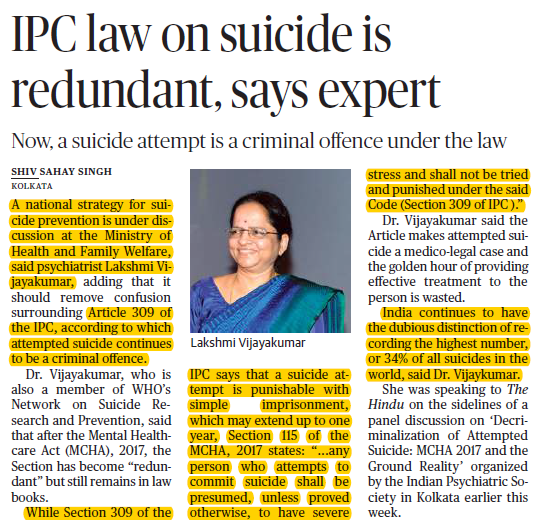 A national strategy for suicide prevention is under discussion at the Ministry of Health and Family Welfare.

Psychiatrist Lakshmi Vijayakumar has said that the government should remove the confusion surrounding Section 309 of the Indian Penal Code, according to which attempted suicide continues to be treated as a criminal offence.

Vijayakumar, who is also a member of WHO's Network on Suicide Research and Prevention, has said that after the Mental Healthcare Act (MCHA), 2017, the Section has become redundant but continues to remain in the law books.

While Section 309 of the IPC says that a suicide attempt is punishable with simple imprisonment, which may extend up to one year, Section 115 of the MCHA, 2017 states:¦any person who attempts to commit suicide shall be presumed, unless proved otherwise, to have severe stress and shall not be tried and punished under the said Code (Section 309 of IPC).

This provision of the IPC makes attempted suicide a medico-­legal case and the golden hour of providing effective treatment to the person is wasted.

India continues to have the dubious distinction of recording the highest number of all suicides (34%) in the world.